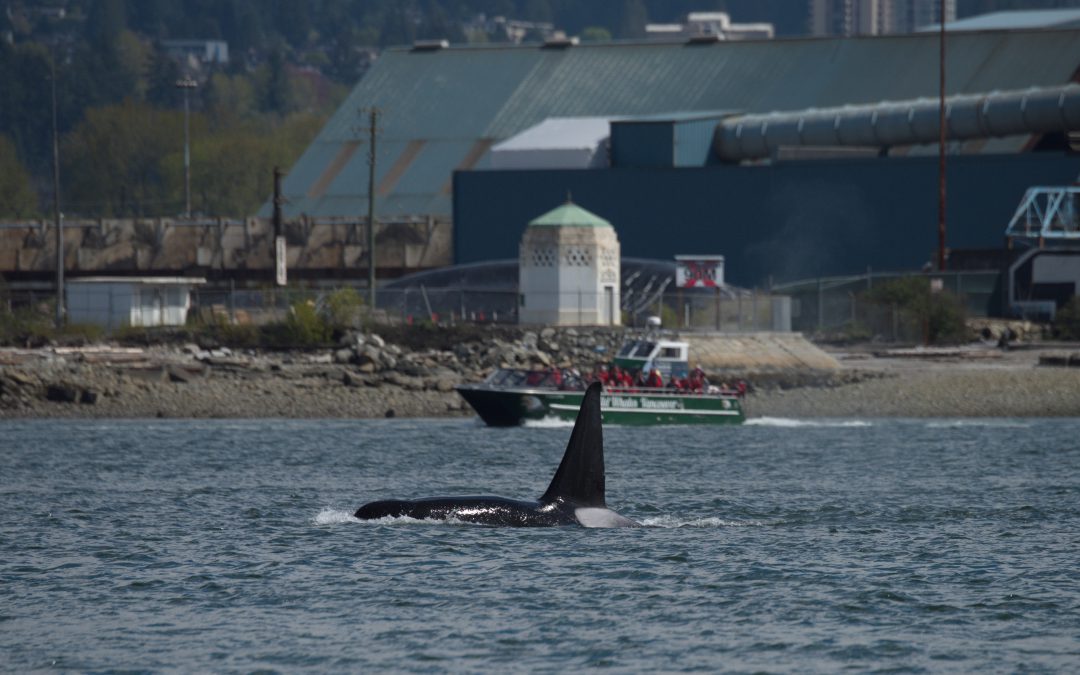 It has been an unusual and uncertain start to 2020. Perhaps we shouldn’t be surprised that a year that started off with pro-democracy mass protests in Hong Kong, Australia declaring a state of disaster due to devastating bushfires, the impeachment acquittal of a U.S. President, protests against police brutality and systemic racism in North America and around the world, and of course the ongoing COVID-19 pandemic that ground the whole world to a halt should continue to throw all kinds of unexpected twists and turns at us as the weeks go by.

So far, 2020 has been eventful in the whale world as well! A number of unusual reports of whales in unexpected places in the first half of the year were reported to the B.C. Cetacean Sightings Network (BCCSN) or made headlines in other parts of the continent:

First, in early March, a lucky observer spotted a grey whale (Eschrictius robustus) along the seawall in Stanley Park. Likely returning to the North Pacific from its seasonal migration to breeding grounds in Mexico, this whale took a bit of a detour into Burrard Inlet, stopping by the Port of Vancouver in its travels. While a very rare occurrence, this isn’t the first time a grey whale has visited Vancouver Harbour – the BCCSN database contains 23 sightings of grey whales at locations east of the Lions Gate Bridge since 1992, including one wayward whale who wandered all the way up Indian Arm in 2015. Grey whales feed in shallow waters on benthic invertebrates (e.g. amphipods, ghost shrimp) and various fish eggs and larvae in eelgrass beds, so it is possible the grey whales in Burrard Inlet have visited in search of these tiny delicacies. 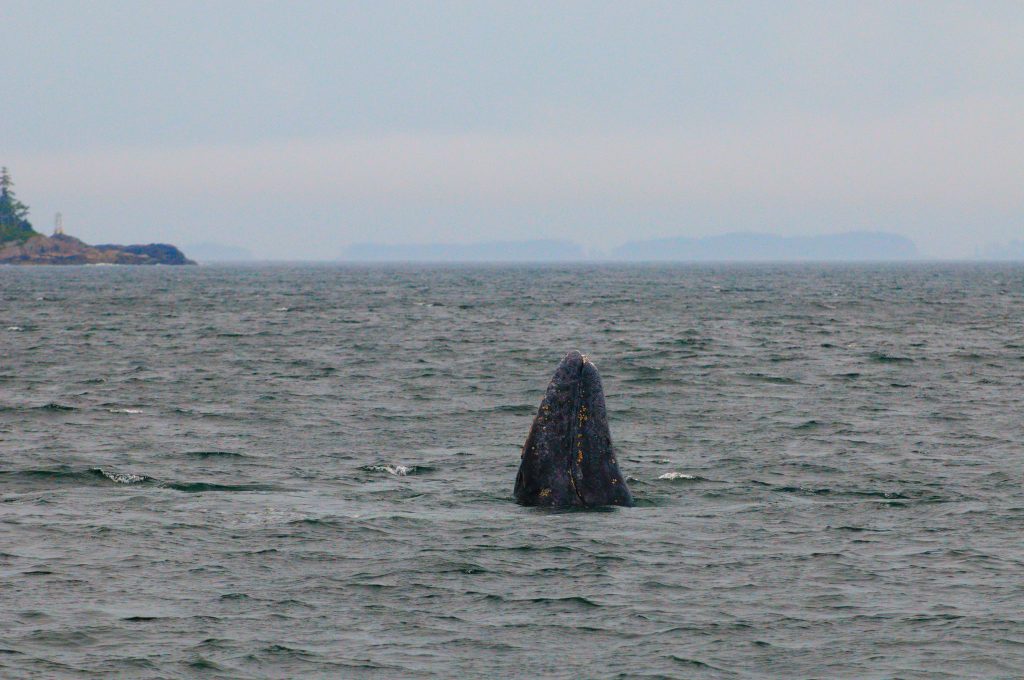 Killer whales (Orcinus orca) have also visited Vancouver this year! A group of Bigg’s (transient) killer whales traversed Vancouver Harbour and stopped by Indian Arm in search of their marine mammal prey in March, and killer whales were again sighted in Vancouver Harbour at the end of May. Seals and sea lions are frequently seen in Deep Cove and further up Indian Arm, and yearly visits from Bigg’s killer whales would suggest these clever animals have learned it is worth checking the area out in search of a snack in the spring and summer months. Since 2015, killer whales have made more than 40 visits to Vancouver, usually in the summertime. When we are able to identify the whales to ecotype, they are most often identified as Bigg’s killer whales, though fish-eating northern resident family the A42s have been known to visit nearby Howe Sound (Atl’ka7tsem) on occasion during the winter months. 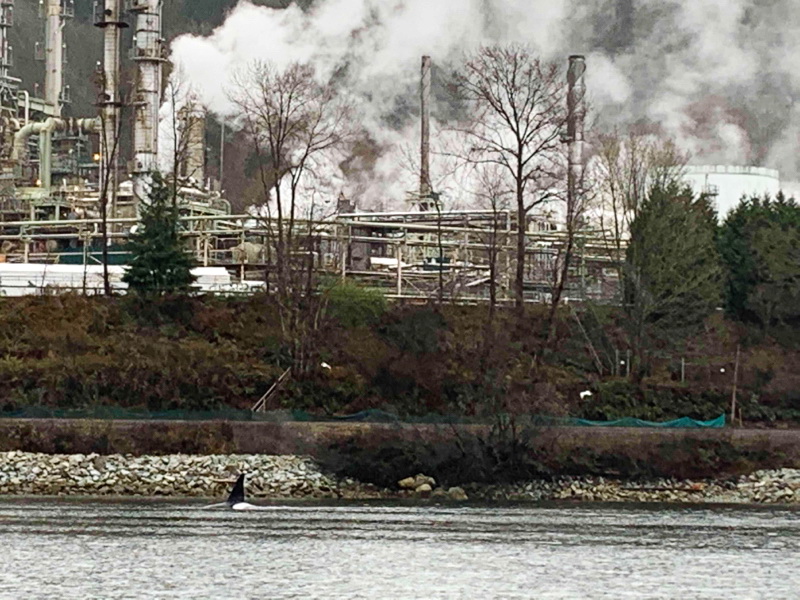 Keen observers in the Vancouver area were also delighted to spot a humpback whale (Megaptera novaeangliae) in Burrard Inlet this spring! A video of a young humpback breaching was submitted to the BCCSN and posted on Reddit by u/anythingkinder in May.

Spotted a humpback whale today from my work! It was hanging around the neptune docks from r/vancouver

This whale was sighted a week or so before several humpback sightings were reported in Howe Sound. While it is possible these sightings were all of the same whale, researchers have so far been unable to confirm the identity of the Burrard breaching humpback. The Marine Education and Research Society (MERS) was able to identify the Howe Sound humpback as one-year old “Halfpipe” – check out their blog post for the full story on their quest to identify the individual humpback(s) who visited the city this spring.

Another humpback whale made headlines recently, but unfortunately with a less happy ending. In late May, a humpback whale was sighted near Montreal’s Old Port, drawing crowds of city-goers to watch the whale over several days. While humpback whales are relatively common in the Gulf of St. Lawrence during the summer months when they gather to feed on aggregations of krill and small fish species, they rarely venture so far down the St. Lawrence River. Onlookers were concerned for the Montreal humpback’s health and safety as it spent several days in the high-traffic area in the freshwater portion of the river, far from its usual habitat. Less than a week after it was first sighted, the whale was found dead, likely struck by a large vessel transiting through the area.

Finally, we ended June with an unprecedented sighting – the FIRST EVER sighting of a beluga whale (Delphinaterus leucas) in California’s waters!

Spotted near San Diego, ecotourism company Gone Whale Watching were on scene to capture aerial photos and video of the beluga. Usually found in Arctic and Subarctic waters of North America, Russia and northern Europe, belugas sometimes make unexpected appearances, like the whale that showed up near Prince Edward Island last summer, or the “Russian spy whale”, nicknamed Hvaldimir, that appeared in Norway wearing a harness in April last year and has been seen interacting closely with humans several times since. Wherever the San Diego beluga came from, it was certainly a momentous sighting that highlights the importance of recording species occurrences from all kinds of sources, from researchers to ecotourism operators and coastal citizens, no matter how unusual the sighting may seem!

You can help collect data on cetaceans and sea turtles! Contribute by being a citizen scientist and participate in the following ways: