The Good Kind of Research Flukes 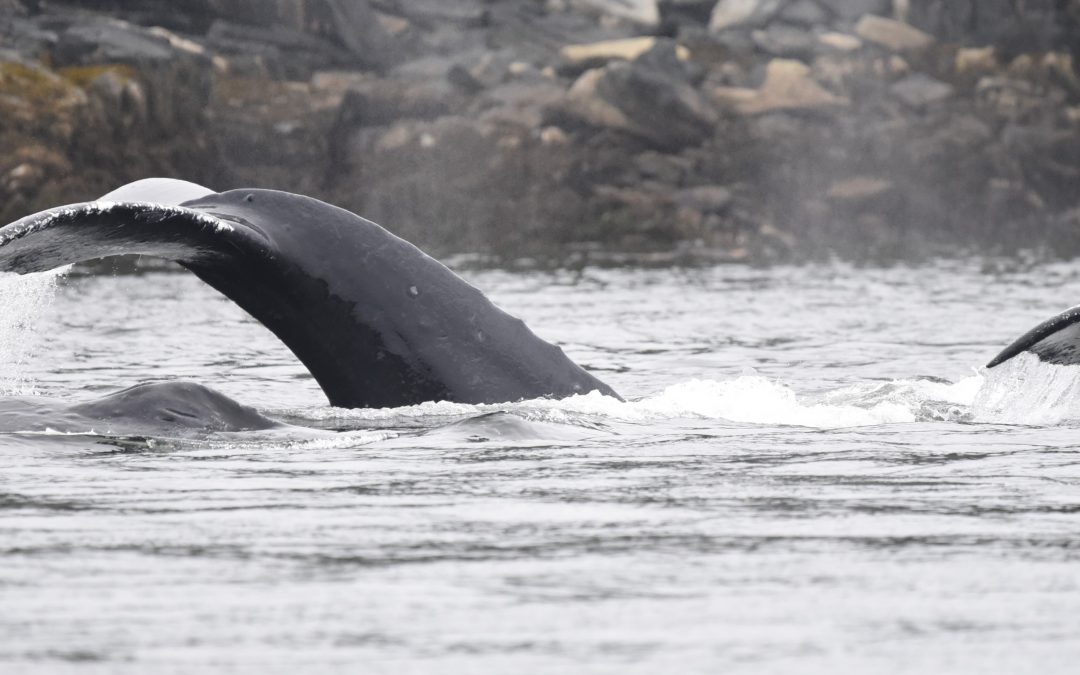 I wake up. As I gradually gain consciousness and escape the fog of slumber, I check my multitude of weather apps to see if there’s still fog over the harbour. There is. And it’s expected to rain consistently for the next three days straight, not to mention there’s a gale warning for this afternoon. Our research vessel, the Tsitika, as sturdy as she may be, starts to feel like a rubber duck when faced with whitecaps and swell over a meter in height. But it’s fine! “We’re researchers! We go out no matter what the weather throws at us!” is what I would say if I were crazy and had no regard for time or reliable data. In reality, it appears today is going to be an office kind of day. I’ll just look at pictures of whales instead.

If I’m being honest, there are a lot of days that we don’t make it out on the water… Whale research, at least the data collection aspect of it, is incredibly dependent on the weather. And not just because we’re all wimps when it comes to rough seas and bumpy boat rides! Here’s the hard truth: in order to collect whale data, you need to be able to find the whales, and in order to find the whales, you need to be able to see the whales (most of the time). 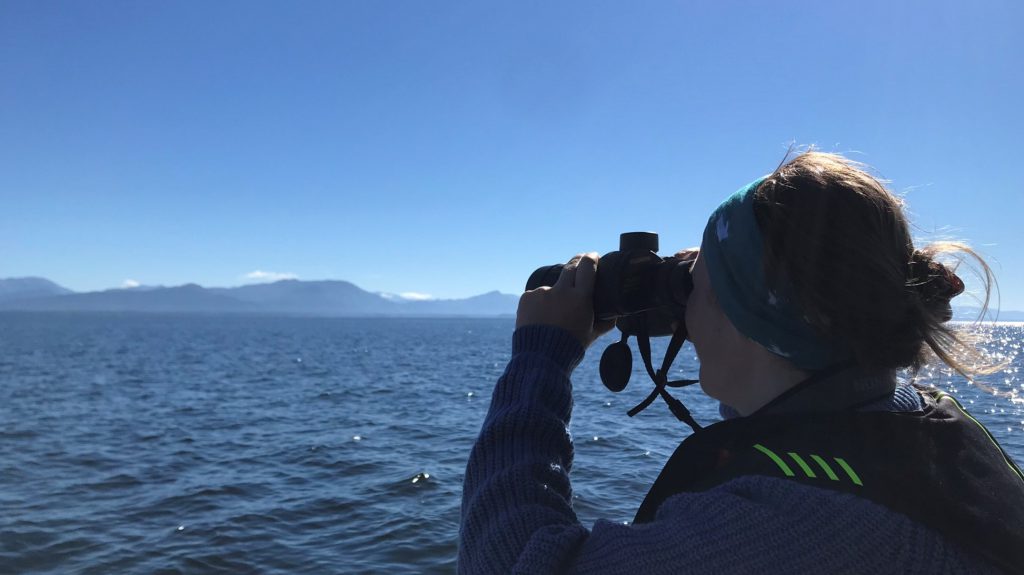 I know that whales are big, they’re the biggest animals on the planet! But remember that when a whale comes to the surface, which is only a mere fraction of the time, often all you see is a momentary poof of air (also known as a blow) escaping its lungs, forming a white cloud as it cools and condenses. Its blow is followed by a dark, slender arch, a dorsal fin, and, if you’re lucky, a fluke (the term used for a whale’s tail fin). And although whales are giants and their blows can be quite impressive, from a distance of a couple nautical miles away or more, they are very easily overlooked. They aren’t just flopping around and making a big splash whenever we’re out on the water! That only happens on special occasions… 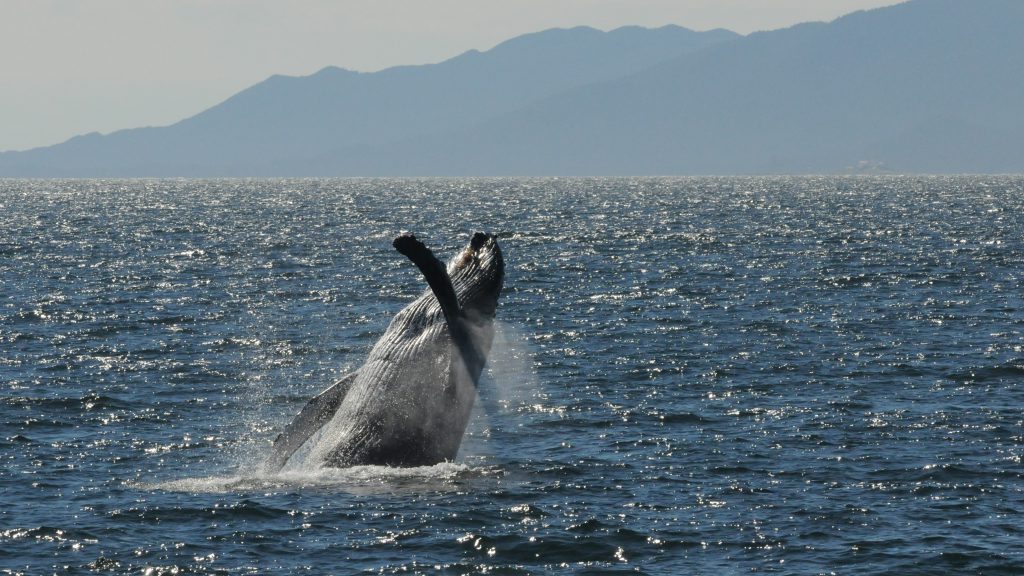 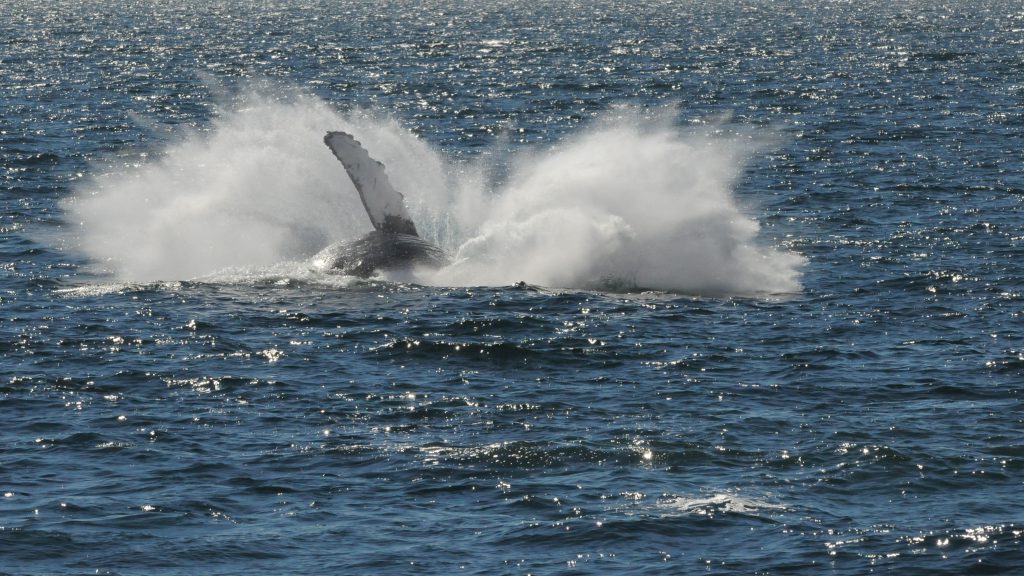 I wake up. As I gradually gain consciousness and escape the fog of slumber, I check my multitude of weather apps to see if there’s still fog over the harbour. There isn’t. The forecast is sunny with blue skies and calm seas all day long! Hooray! Time to pack my lunch, grab my gumboots, throw on some safety gear, and head out on the water! 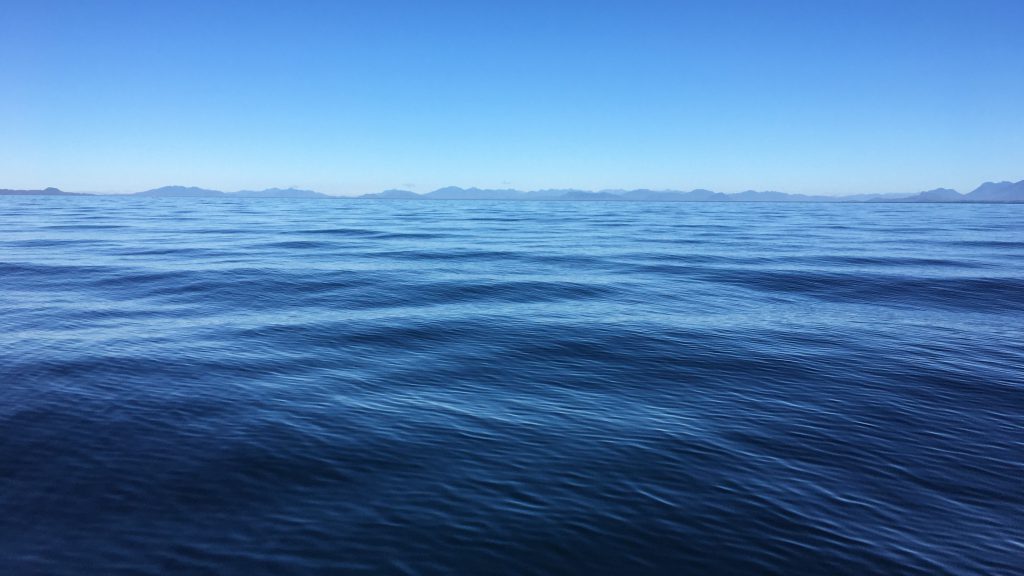 Our primary study area is Chatham Sound, located in the heart of Coast Tsimishian traditional waters. Although we see all kinds of cetaceans (the collective group name for whales, dolphins, and porpoises), we mostly focus on humpback whales, documenting their presence and behavior. Humpbacks frequent these waters in the summer months especially, when feed is in abundance and nutrients are continuously rising from the depths in a process known as upwelling. Like many of us, they are remarkably motivated by food. Who isn’t? 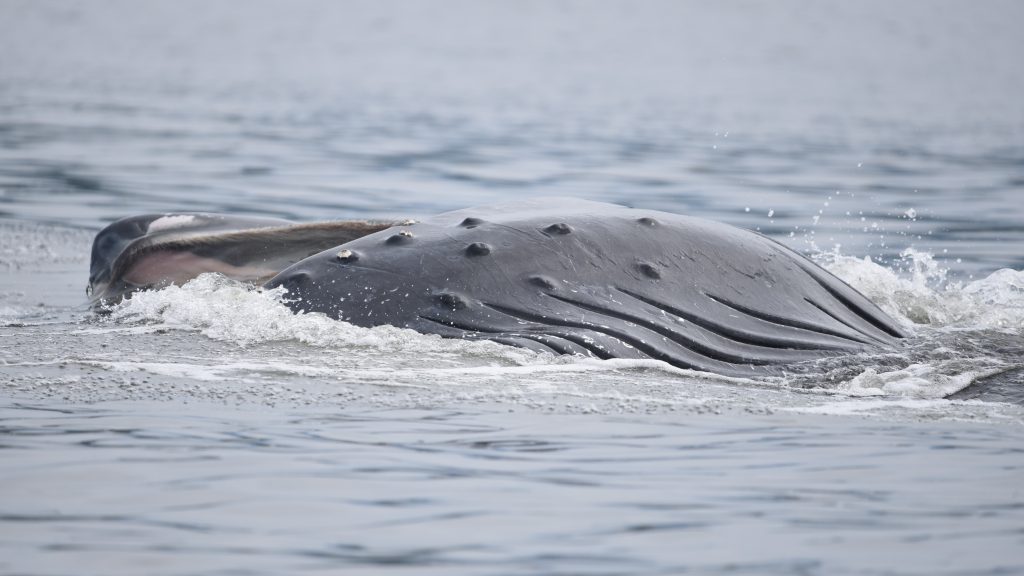 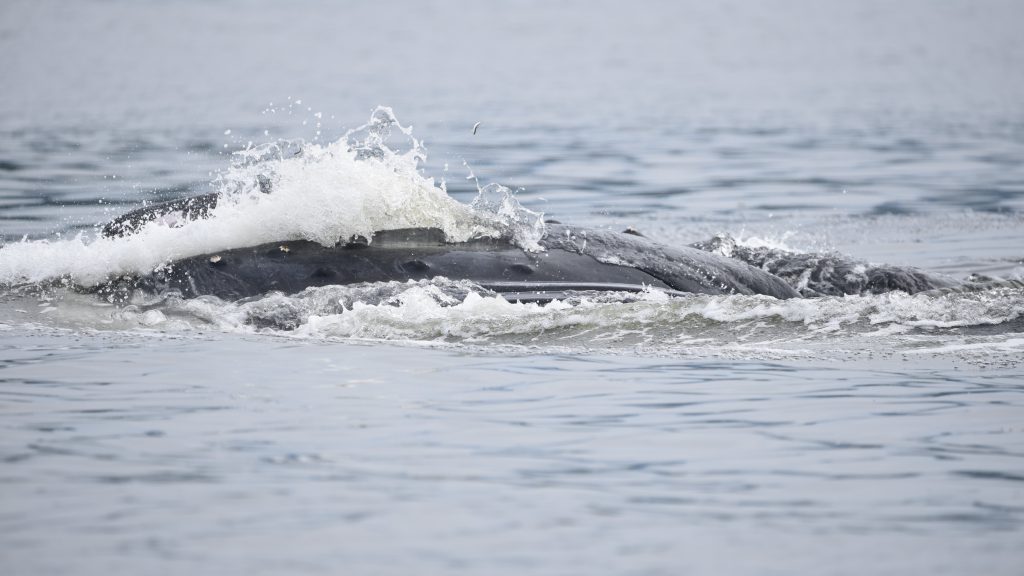 Every humpback whale is unique. More specifically, every humpback whale’s fluke is unique. When identifying humpbacks, we look for many characteristic differences in: (1) the amount of white or black colouration it has on the underside of the fluke, (2) the patterns and shapes in the colouration, (3) the scarring from old whale barnacles (those exist) and (4) teeth marks (also known as rake marks) from when they were attacked by killer whales as calves (yes, you read that right), and (5) the shape of the fluke itself. The pattern along the edge of the fluke is called the trailing edge. This is arguably one of the most important distinguishing characteristics of humpback whales. Especially when you’re trying to tell humpbacks apart that have virtually no scarring or distinguishable white patches on their flukes! Sneaky whales… 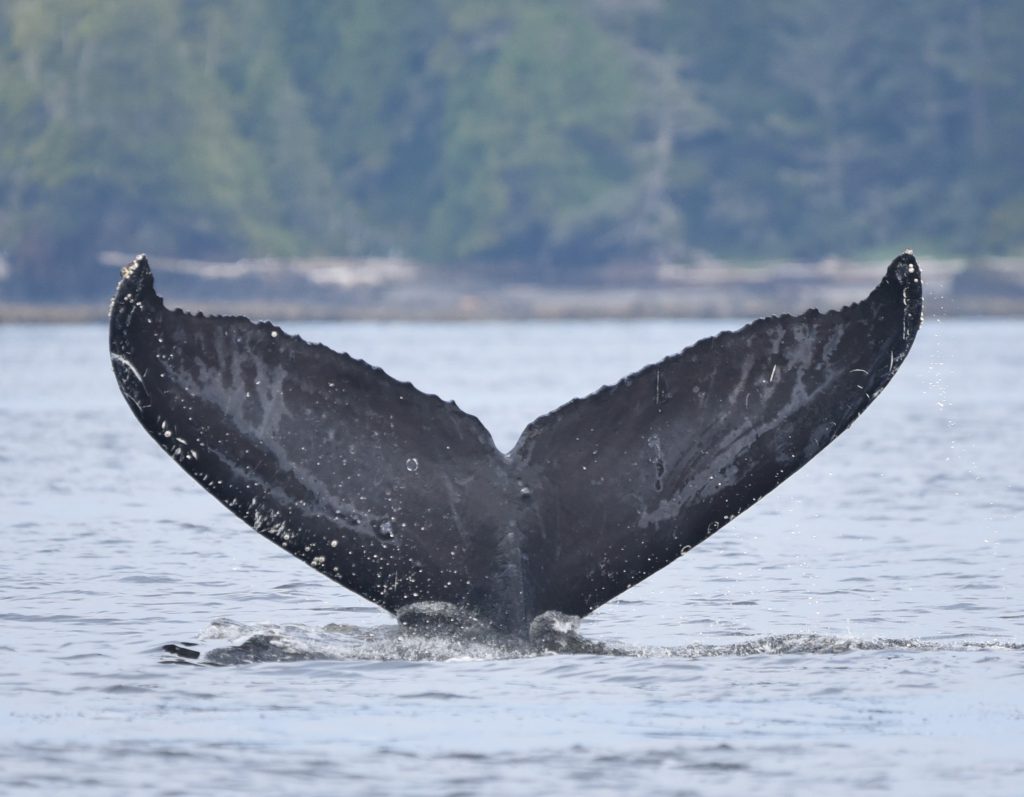 Through acquiring historic photos, photos sent in from volunteers, and photos we take opportunistically when we’re out on the water, the North Coast Cetacean Research Initiative has developed an updated 2020 Humpback Whale Catalogue with 254 unique individuals! Each humpback whale is given a special alpha-numeric code that identifies them, and the majority of humpbacks also have nicknames! A humpback’s nickname is primarily based on the characteristics of their flukes that make them more memorable when you end up sorting through thousands of photos after being out in the field. Some whales you get to know just because you see them all the time. Wally and Bear, for example, may as well be celebrities we take their photos so often! 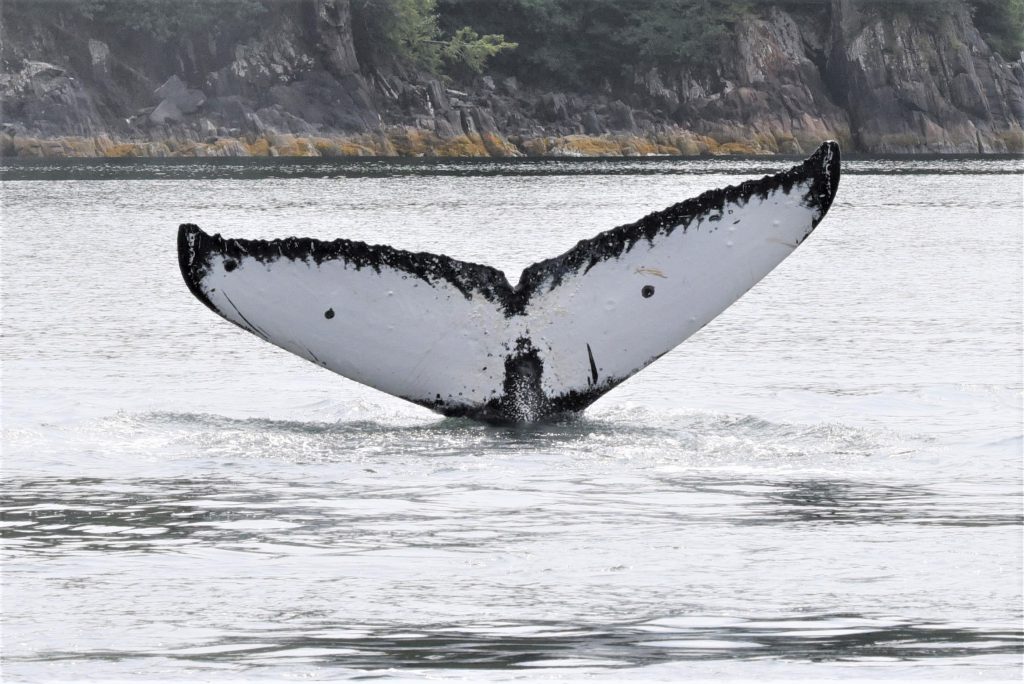 The ability to identify individual humpbacks is incredibly useful when it comes to research. For example, through photo-identification of individuals, we can more accurately estimate the total population of humpbacks in Chatham Sound. It’s harder than you’d think! Imagine you saw a sheep run around the corner of a building. Then you saw another sheep run around the same corner of that building. Let’s say this happened ten times. All the sheep look the same. How many sheep were there? Was it the same sheep circling the same building ten times or were there ten different sheep? Or were there two sheep, but they each circled the building five times? Or were there nine sheep and one sheep did an extra loop? Why are all these sheep circling this building? Who lost all their sheep and how did they escape!? The bottom line is that population statistics are hard but being able to identify individuals makes it way easier.

Back to the Boat!

We’ve been gliding over the glassy sea aboard the Tsitika for nearly an hour, periodically scanning the horizon with our binoculars. Then I see it! Unmistakably, I spot a blow about a nautical mile away! Make that two blows! We motor off to catch up and position the vessel so we’re behind the whales, perfectly poised for a fluke shot. The humpbacks surface a few times, we keep pace, and they each start to arch their backs. This is what we’ve been waiting for! They go in for a deep dive and……. no flukes. Darn! We proceed at a slow, steady pace. About eight minutes pass and we see another blow. And another! They’re about three hundred meters ahead this time. The whales surface once, twice, three times. They’re going in for a deep dive! We watch as the gentle giants arch their backs and then… Click, click, click, click, click, click. We got it! We got a double fluke shot! Identification photo success. After a brief glance through the pictures, my eyes widen with glee. I knew those flukes looked familiar! It turns out we were following Bear and Archipelago this whole time! Classic. Identifying individuals also allows us to determine how local some of our whales are by evaluating their site fidelity, which means we look at whether they return to Chatham Sound year after year. In collaboration with other research groups, we can learn more about their travel and migration patterns by looking at where the whales go when they’re not in Chatham Sound (it turns out a lot of our humpbacks, like myself, are quite fond of Hawaii). We can learn more about their feeding strategies, social behaviours and connections, and note whether they have calves with them.  Through all this learning, a bigger picture begins to emerge. As we know more about these whales and the threats they face, we can start to piece together how collective human actions can impact their populations, and in turn, how we can help mitigate threats in an effort to protect them and their habitat!

That sounds like our cue. Time to head out or we might be the ones sleeping with the fishes!

Until next time whales. 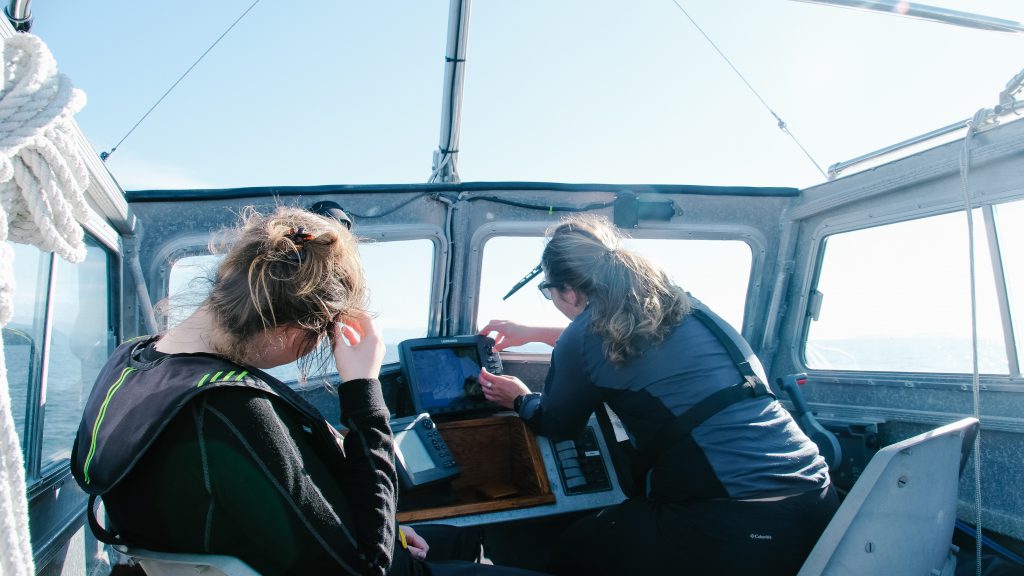