Your Sightings at Work! Reducing the risk of ship strike and disturbance with the click of a button.

In British Columbia, we are lucky to share our waters with over 26 species of whales, dolphins, and porpoises (cetaceans), from the diminutive harbour porpoise to the mighty blue whale.  Unfortunately, the increasing marine traffic resulting from population growth, trade demands, and infrastructure projects is impacting the ability of these iconic animals to survive and thrive in our waters.

Vessels can strike and injure, and sometimes kill, cetaceans.  The presence of vessels can interrupt critical life processes such as foraging, resting, mating, or nursing calves.  Vessel noise can increase a cetacean’s stress level, cause it to avoid important feeding areas, and mask important echolocation and communication sounds.  However, there are mitigation measures that mariners can implement to reduce their impact.  Reducing speed in areas commonly used by cetaceans allows more time for the animal to avoid the oncoming vessel and for the vessel to adjust its course.  Vessels can reduce disturbance by giving the whales a lot of space (at least 100 metres, more is beneficial!).  As well, underwater vessel noise can be decreased by reducing vessel speed and avoiding rapid acceleration.

In order to enact these measures, mariners require advanced warning of nearby cetaceans. The WhaleReport Alert System (WRAS), created by Ocean Wise in partnership with Vancouver Fraser Port Authority, Prince Rupert Port Authority, and other industry and government partners, is a tool that delivers real-time alerts of nearby cetaceans to mariners of large commercial vessels. Alerts are generated by real-time cetacean sightings reported by the public to the BCCSN through the WhaleReport app.  The WRAS gives mariners the information they need to take mitigative action in order to avoid striking whales and to reduce acoustic and physical disturbance to vulnerable cetaceans.

Thanks to your efforts, the WRAS has delivered over 8,000 alerts to large vessel operators from 47 marine organizations! 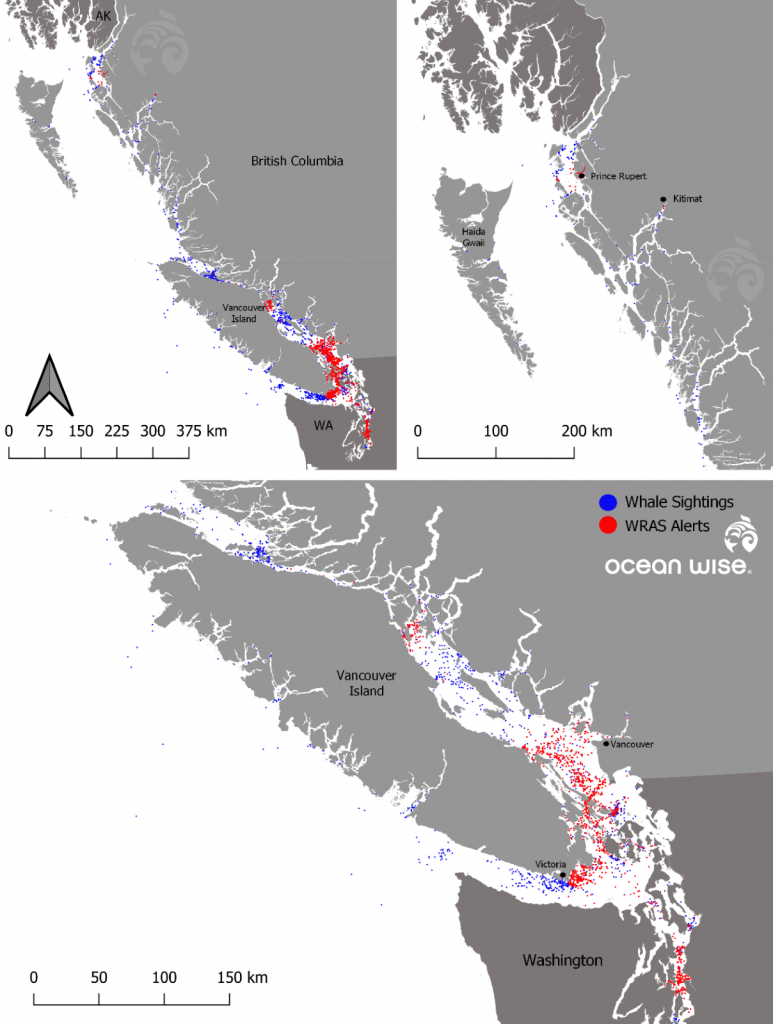 Sightings of large whales reported in real-time using the WhaleReport app in British Columbia and surrounding waters, and whale alerts received by WRAS users from April 1, 2020 to March 1, 2021. Alerts are generated when WRAS users are within 10 nautical miles of a recently reported large whale.