The grey days of winter: Why the grey whale off the Victoria coast is unusual, and what you can do to help Over the past two weeks, people of the Greater Victoria area have been treated to sightings of a somewhat unusual visitor for the time of year! Grey whales (Eschrichtius robustus) are more commonly found in the warm waters of Mexico’s Baja Peninsula at this time of year, after migrating an astounding 5,000 miles from summer feeding grounds in the seas surrounding Alaska. However, a grey whale was spotted just north of Glencoe Cove in Victoria around the 10th January and has stuck around ever since. After receiving reports of a grey whale through Ocean Wise’s WhaleReport app and through local reports to the Coast Guard, photos were relayed to Fisheries and Oceans Canada (DFO) to assess the health of the animal. Photos from Dr. Gerald Graham, On Scene Commander for marine oil spill response, captured pictures of the whale which were then requested by Cascadia Research Collective in an attempt to identity the individual whale. The Cascadia Research Collective determined through the lateral (side-view) photos of the whale Dr. Graham submitted, that this is an uncatalogued individual and therefore designated this grey whale the identification code of CRC 2440. The unfortunate news is that this individual is on the leaner side of healthy.

Paul Cottrell, Pacific Marine Mammal Coordinator for the Department of Fisheries and Oceans (DFO), was alerted to grey whale CRC 2440 via the DFO marine mammal incident hotline in mid-January.   “Local residents, boaters, whale watchers and researchers have been monitoring the animal and are curious about daily movements and why the animal remains in such a small area.” states Cottrell.  “The animal appears a little on the skinny side from pictures taken by members of the public, whale watchers and researchers but likely nothing to be concerned about at this point. We remind boaters to please keep at least 100m from this grey whale to ensure its activities are not disturbed.” Unlike humpback whales that engulf their prey from underneath or the side, grey whales are bottom feeders and instead feed on the critters that live in and amongst sea floor sediments. They use a suction feeding strategy to capture small benthic worms and invertebrates by filtering through sediment using their baleen plates.

Eastern Pacific grey whales such as CRC 2440 are currently listed as a species of special concern under the Species at Risk Act (SARA). Grey whales suffered huge population losses during the whaling period in the 17th-20th centuries, and despite some degree of population increase since the end of whaling, there was a sharp decline in number between 1998 and 2002, and again in 2016, likely due to lack of food in their summer feeding grounds. Currently, the main threats to grey whales in the eastern Pacific include: entanglement in fishing gear, ship strikes, degradation of feeding habitat, noise disturbance from ships, and the effect of pollutants in the water.

Since 2011, there has been an active Management Plan to reduce threats to grey whales and conserve this important species. In order to achieve this Management Plan goal, it is vital to understand the distribution and migration route for grey whales in Canadian and US waters.

While the sighting and condition of grey whale CRC 2440 in the Haro Strait at this time of year is a little concerning, it provides a rare opportunity to catch a glimpse of these docile, curious creatures from a safe and non-invasive land platform.

How can you help grey whales?

Be Whale Wise! Laws pertaining to marine mammals in Canada state that boats must stay: 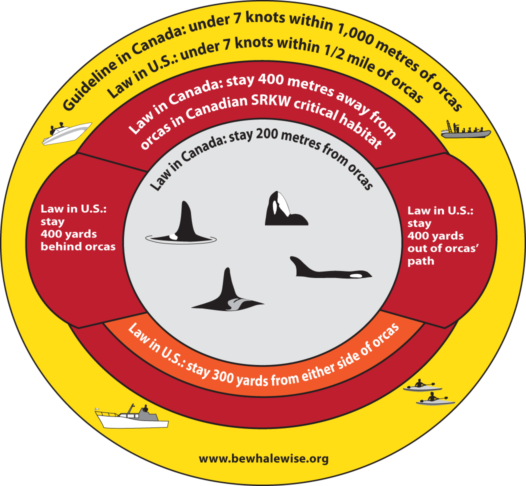 Send a Sighting, Save a Whale:  You can help protect these animals, while contributing to conservation-based research, by reporting any whales you see through Ocean Wise’s WhaleReport, available online or through your app store (available for android and iOS devices).  Your reports are used to inform large ships of whales in their vicinity through the WhaleReport Alert System (WRAS) so that they can take measures such as slowing down or diverting course to reduce the risk of collision or disturbance.  If you think you’ve seen a grey whale or any other species of cetacean off the BC coast, make sure to take as many pictures as you can and report the sighting immediately, providing as many details as possible.  Learn more here! You can help prevent ship strikes and disturbance. Report your sightings on the WhaleReport app to alert large vessels of whales in their vicinity!

Report an incident: If you see a sick, injured or distressed marine mammal, please contact the DFO via the toll-free marine mammal incident reporting hotline 24 hours a day, 7 days a week at 1-800-465-4336, via VHF Channel 16 (Coast Guard), or via email [email protected]. Read more about reporting incidents here.