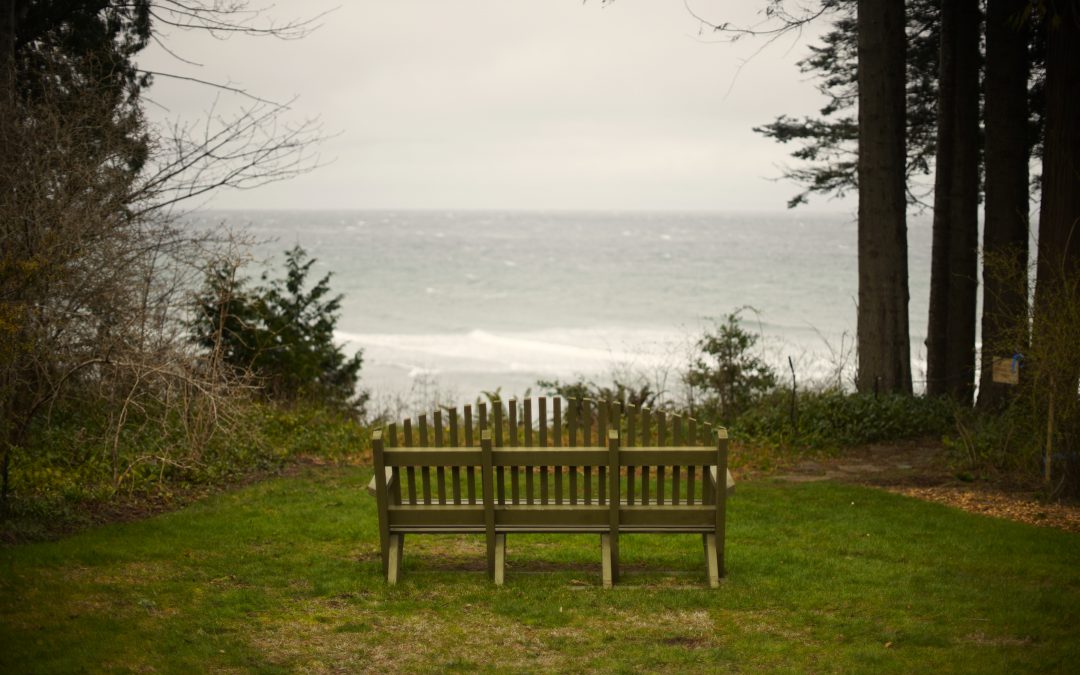 Recently, SVICRI’s Aaron Purdy and I took a trip up the east coast of Vancouver Island to visit a few of B.C.’s many land-based whale watching locations, known as “The Whale Trail BC”. These locations were established in partnership with The Whale Trail, a Washington-based organization whose mission is to inspire appreciation and stewardship of the marine environment.  The Whale Trail is comprised of over 100 land-based whale watching sites which span the coasts of California through British Columbia. There are 35 Whale Trail sites overall in British Columbia, with 12 of those located on Vancouver Island. The locations of these sites are marked by interpretive panels, designed in collaboration with the local community, which highlight the unique features of the area and the marine mammal species that are most often spotted there. They are strategically placed in marine mammal hotspots to give the public a chance to view animals safely from shore, and hopefully become more familiar with the marine wildlife living right beyond their doorstep. Keep reading to learn more about the sites we visited and how you can plan your own Whale Trail trip! 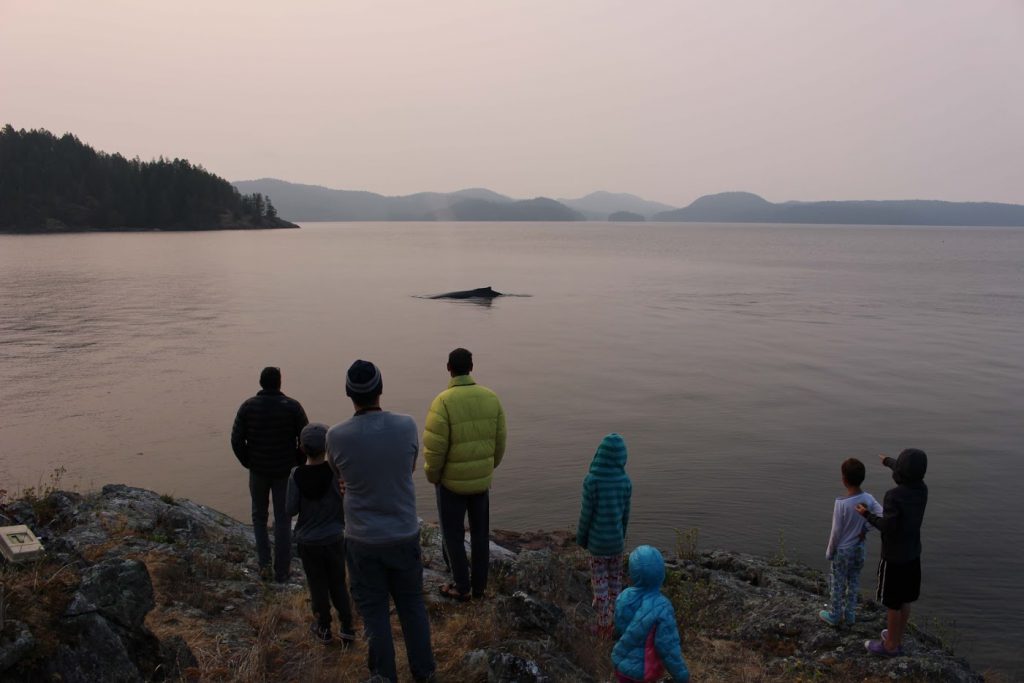 Humpback whale surfaces in front of a group of people. Credit: KF Dey.

Beginning near the tip of the Saanich Peninsula, we first stopped at the Shaw Centre for the Salish Sea, a not-for-profit aquarium and learning centre in the heart of Sidney. The centre hosts fun, interactive activities for children as well as informative displays of local marine wildlife, making the experience appeal to visitors of all ages. Inside the centre you will find various species of fish, anemones, and corals. See if you can catch a glimpse of the incredibly intelligent giant Pacific octopus, which sometimes likes to rest where you might not expect! When you are all done inside, head out to the back of the centre. Here you can watch for killer whales passing through Haro Strait, as well as harbour porpoises, sea lions, and river otters. You can even spot the occasional humpback whale.

We then travelled to our next site, Fort Rodd Hill. Located on the traditional territories of the Lekwungen-speaking peoples (today known as the Esquimalt and Songhees Nations), this was an active coastal artillery fortification from 1895 to 1956 and is strategically placed overlooking the Strait of Juan de Fuca. Here you can wander through secret bunkers, military command posts, and 19th century buildings, as well as camp overnight in a one of the oTENTiks on the property – just book a reservation. We explored the paths while making our way towards the Fisgard Lighthouse where we could get a good look at the strait, and not to mention the majestic Olympic mountains on the other side. 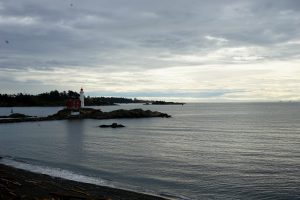 Whales will usually travel through the Strait of Juan de Fuca quite a distance from the shore, so keep your eyes open for spouts or dorsal fins (for an even better chance of spotting them, bring along a pair of binoculars!). In the spring and summer months, humpback whales might be seen travelling with their calves, and southern resident killer whales or Bigg’s (transient) killer whales can be spotted here as well. One might even be lucky enough to catch a glimpse of a grey whale, migrating up from their wintering grounds in Mexico to their summer feeding grounds in Alaska and Japan, which sometimes make a visit to the Juan de Fuca in the spring and autumn. Other species you might see here include curious harbour seals and furry river otters, with Steller sea lions, elephant seals and California sea lions occasionally making appearances as well.

We continued our way north, up over the Malahat and past Nanaimo to Milner Gardens and Woodland, passing some magnificent views of the Saanich inlet and coast mountains on the way. This beautiful 28-hectares of garden and ancient forest are set upon a clifftop in Qualicum Beach on the traditional lands of the Qualicum First Nation. The gardens themselves contain winding paths among old growth Douglas fir forests, a rhododendron garden, and a traditional tearoom. Make sure to check out the 600-year-old Douglas fir tree while you are here, still standing tall. 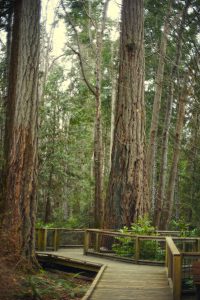 After perusing the gardens, we grabbed our binoculars to see if we could catch a glimpse of anything out in the Strait of Georgia. Unfortunately, stormy weather like this is not ideal for spotting marine mammals; however, on a clear and less windy day, the water sparkles beneath a backdrop of the spectacular coast mountains. Steller and California sea lions tend to hang out here – if they are around, they will be easy to hear! These noisy animals are particularly frequent visitors to the area during the annual herring spawn in the spring. Harbour seals, killer whales, humpbacks, harbour porpoises, and Pacific white-sided dolphins occasionally pass through here as well, so keep an eye out for their dorsal fins and blows.

Following our tour at the gardens, our travels took us to the Discovery Passage Aquarium. The aquarium, located on the unceded territories of the Wei Wai Kum First Nations, displays local marine wildlife and offers hands-on educational activities in their explorer lab. This non-profit society hopes to engage and educate their accessible programming and experiences. 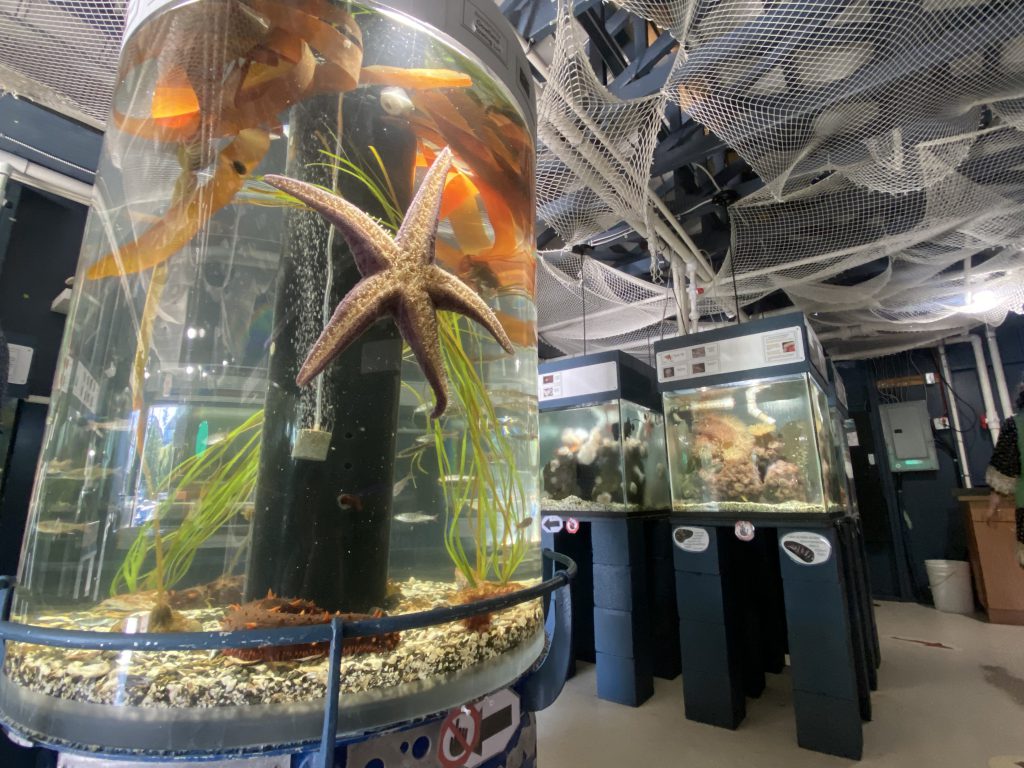 Right behind the aquarium, you can find a pier that looks out into the channel between Vancouver Island and the Discovery Islands, part of the Discovery Passage. This area, which is the northernmost point of the Salish Sea, serves as a marine-mammal highway of sorts. Animals tend to travel through this passage from the Johnstone Strait into the Strait of Georgia, so the wildlife watching is plentiful. From this pier one might spot resident and transient killer whales or witness sleek Pacific white-sided dolphins, harbour porpoises dipping quickly across the water’s surface, or the Dall’s porpoise – just don’t mistake it for a baby killer whale! Listen for the bark of Steller sea lions, which are commonly seen in the area. In the spring and fall watch for humpback whales, who might treat you to a show of breaching, tail slapping, and fluking. Less common to the area are grey whales, California sea lions, and minke whales. 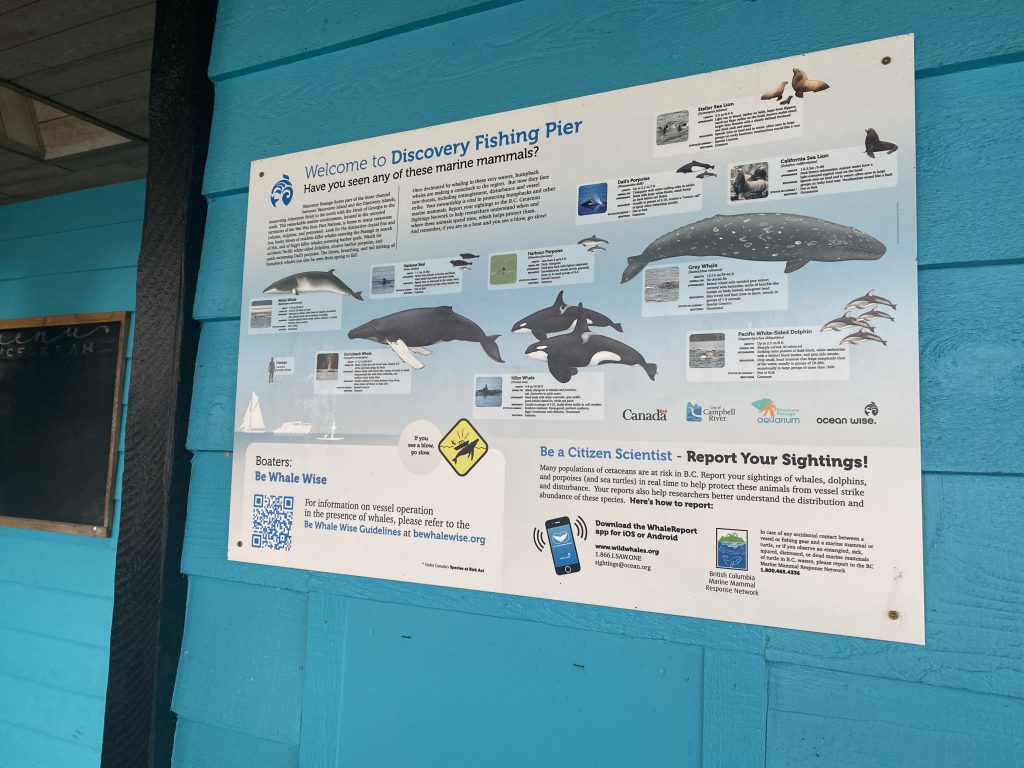 Our fifth and final stop took us to the BC Ferries terminal in Campbell River. Ferries provide an excellent opportunity to get out on the water for yourself and spot a diverse array of marine wildlife! The Whale Trail in British Columbia has conveniently partnered with several BC Ferries terminals, including those in Skidegate, Bella Coola, Blubber Bay, Langdale, Little River, and Tsawwassen. Once on board the ferry you can either settle in indoors or head out to one of the observation decks to try and spot marine mammals out in the water, from killer whales and Pacific white-sided dolphins to sea lions and harbour seals!

And there you have it! A huge thank you to all our partners, who help make the Whale Trail possible. To plan your own land-based whale watching adventure, make sure to visit The Whale Trail website. Here you will find all the information you need to hit the road and see some of the diverse marine wildlife the Pacific north-west has to offer. All you need is your friends and family, your binoculars, and your camera! 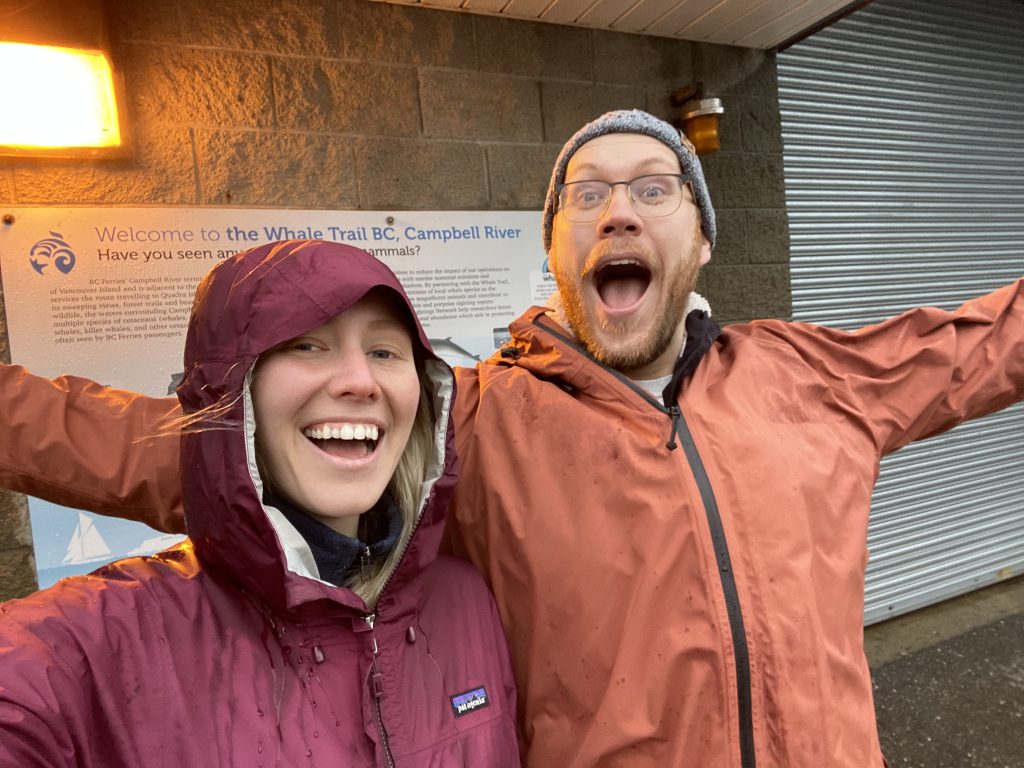 Kayla (left) and Aaron (right) at their fifth and final stop along their Whale Trail journey. Credit: Ocean Wise. 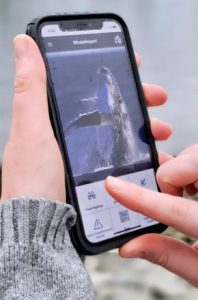 And of course, remember to report your cetacean sightings to the B.C. Cetacean Sightings Network so you can contribute to the real-time data collection of these charismatic wild animals.

In addition to contributing to research, real-time sightings submitted to WhaleReport help protect whales by alerting large ships, like freighters and ferries, to their through the WhaleReport Alert System (WRAS).This information gives mariners the time to enact measures, such as slowing down and diverting course, to reduce the risk of collision or disturbance.