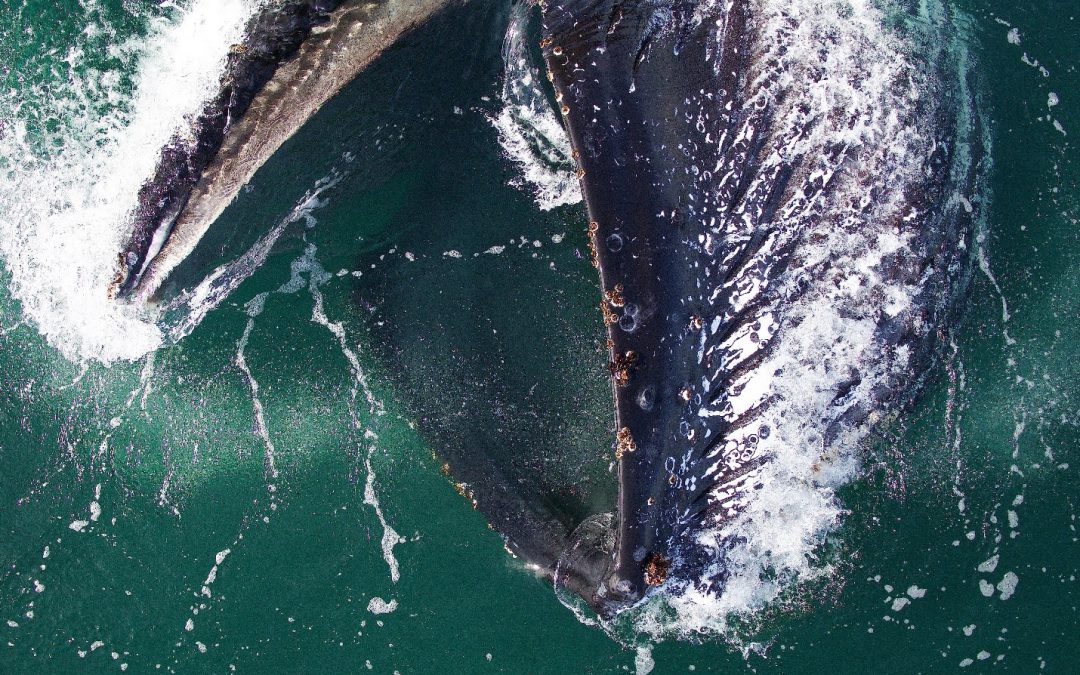 Today marks the international celebration of World Oceans Day. Originally brought to fruition in 1992 at the United Nations Earth Summit held in Rio de Janeiro, the goal of the day was to inspire appreciation and stewardship of the ocean. By 2008 the UN General Assembly had passed a resolution to designate World Oceans Day as an international day of awareness for the ocean, and it has remained so to this day.

Each year the United Nations adopts a theme for World Oceans Day to highlight an issue or solution pertaining to the declining health of our oceans, with this year’s theme being Revitilization: Collective Action for the Ocean. A fitting theme, as it is critically clear that we will have to work collectively to mitigate the current threats facing the ocean, such as declines in marine biodiversity, rising temperatures, and chemical contamination of marine environments. The ocean covers over 70% of the Earth, and every single person relies on the ocean in some way, whether it is the oxygen we breathe or as a primary food source.  This year’s World Oceans Day asserts that we should be taking better care of the ocean, together.

Read on to find out more about how Ocean Wise’s Whales Initiative is working to address and mitigate negative impacts on some of the most charismatic and well-known marine mammals in the world’s oceans. 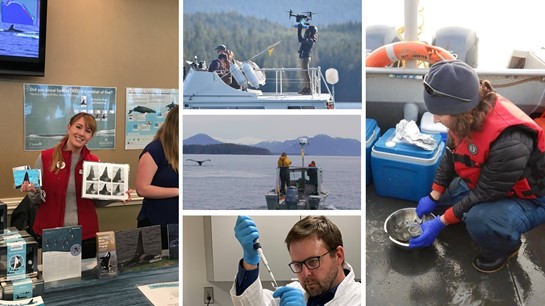 The B.C. Cetacean Sightings Network is a dedicated network of over 7,000 observers, including researchers, government agencies, and local communities. This network contributes pertinent information on spatial and temporal abundance of cetacean species in B.C.  The BCCSN database holds over 300,000 sightings and is the primary source of cetacean occurrence in BC’s waters.

Real-time sighting reports submitted through Ocean Wise’s WhaleReport app are relayed to large commercial vessels via the WhaleReport Alert System (WRAS) and alert shipmasters to the presence of whales in their vicinity. With this advance warning, ships can take mitigative measures to avoid ship strikes or and reduce acoustic and physical disturbance. Since its inception in 2019, the WRAS has sent out over 20,000 alerts throughout BC and Washington State and is regarded as an important tool in mitigating ship-strike fatalities and disturbance.

Land-based observers watch a humpback whale.  These observers reported this whale on our WhaleReport app, thus contributing to research and conservation.

The BCCSN also educates boaters about the Be Whale Wise guidelines and marine mammal regulations to promote safe and responsible wildlife viewing.  In partnership with The Whale Trail, the BCCSN also works with local communities to establish land-based whale watching locations throughout B.C. to inspire appreciation and stewardship of whales and our marine environment.   By engaging with local communities through various outreach campaigns, events, presentations, and workshops, the BCCSN hopes to instill a sense of stewardship for marine environments and the many species that rely on them. 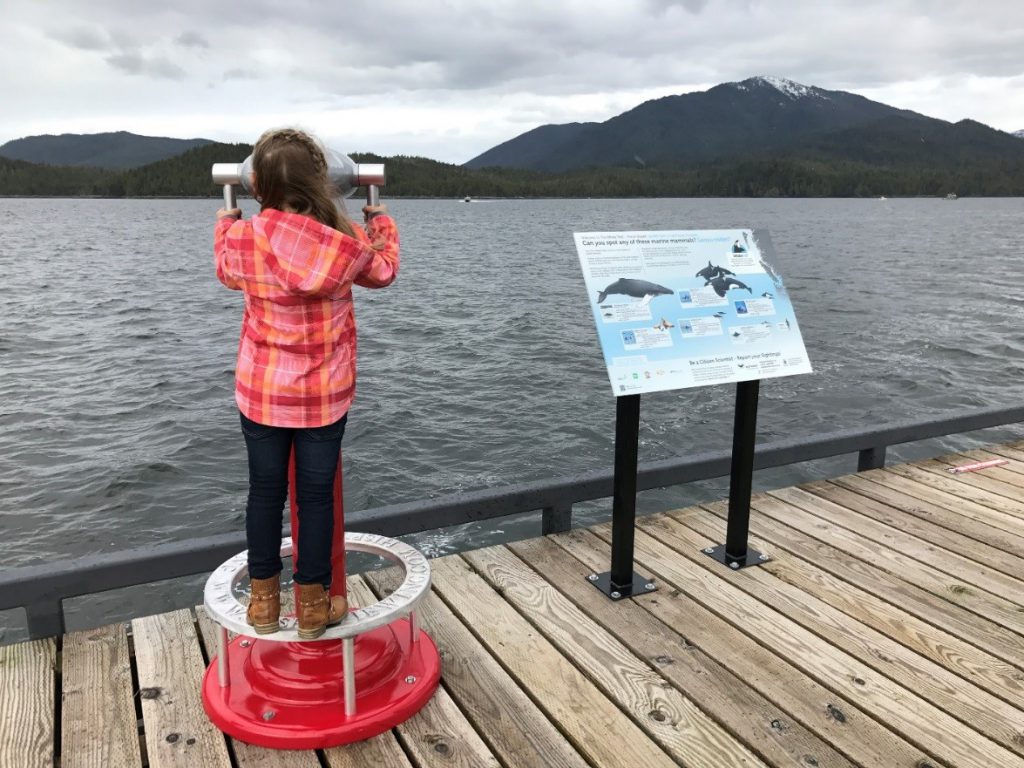 The Whale Trail BC site at Community Pier in Prince Rupert is one of the of the many Whale Trail sites that can be visited along the coast of B.C.

Using drone-based aerial photography, the photogrammetry team assesses and monitors the health, body condition, and habitat use of killer whales and humpback whales over time. Monitoring these changes provides important insight into prey availability and how fluctuations in prey abundance may be impacting whale populations. An increase or decrease in prey abundance can be an important indicator of overall ecosystem health, as each marine species plays an important role in maintaining a balanced environment.

Through closely monitoring body condition of whale populations, the Cetacean Body Condition Research & Health Monitoring Program is able to inform fisheries management decisions, such as closures or harvest reductions. In addition to drone-based photogrammetry techniques, fecal sampling is often used to determine other factors relating to body condition and health such as pregnancy success rates in killer whale populations and nutritional- and disturbance-related stress in both killer whales and humpback whales.

Fecal samples also house important information about the demographics of whale populations. The Conservation Genetics Research Program has been using a combination of fecal samples and biopsy samples to look at parentage and population diversity in BC’s killer whales. By using this approach, the team can identify individual whales based on their unique DNA fingerprint and match the results of genetic analyses to body condition scores from the Photogrammetry team to paint a near complete picture of whale health.

In addition to testing fecal and biopsy samples, the conservation genetics team has been developing techniques to identify and sex whales based on the DNA the whales leave behind in their environment. This type of DNA is called environmental DNA (eDNA) and the team has been collecting sea water samples from humpback fluke prints – the patch of calm water on the surface of the ocean, formed by the passing/diving of a whale. eDNA is a powerful tool for determining presence and absence of whale species in the vast ocean environment and can also be the source of rich genetic information to test how related populations of whales are. Similarly to fecal samples, this method is also very non-invasive since samples are collected passively in the environment. The results of the conservation genetics team’s many projects have enabled the team to understand more about the relatedness of individuals and the genetic structure of whale populations (e.g. sex ratios), which informs how these whale populations are monitored and managed.

The NCCRI conducts rigorous field work and supports citizen science as the northernmost Whales Initiative office. This team leads marine mammal research and conservation in the Prince Rupert area and has recently expanded to Haida Gwaii. As active members of several committees in the region, the NCCRI team is dedicated to collaboration with local stakeholders and encouraging community members to participate in citizen science projects such as the BCCSN. 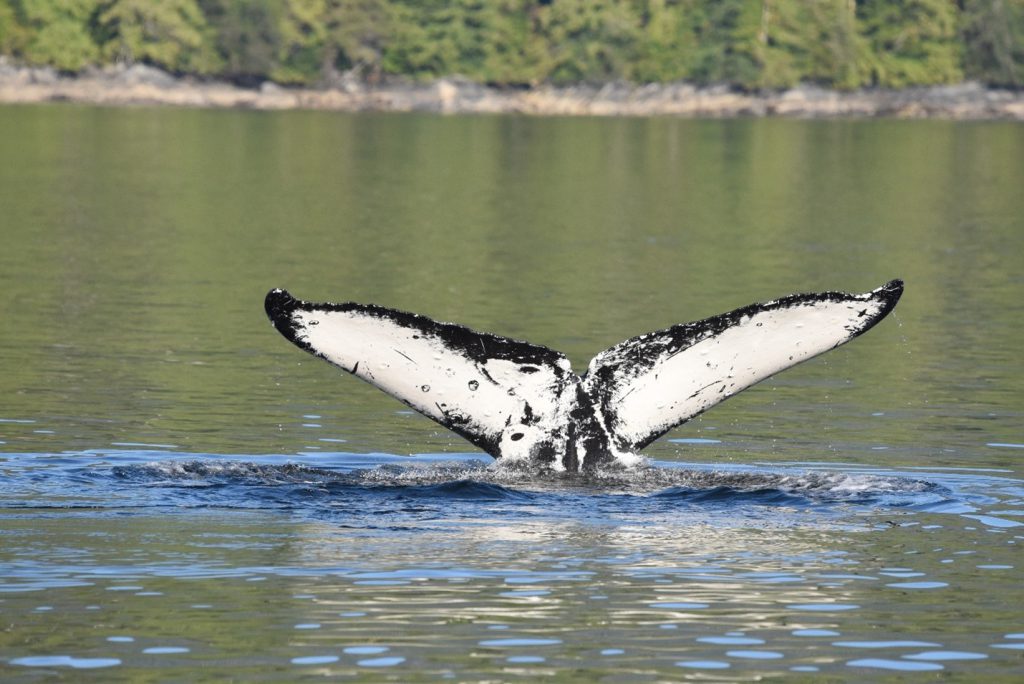 Humpback whale known as Mangle (BCZUKNC2015_01) who is regularly seen off the North Coast of B.C.  The NCCRI is responsible for curating and updating the humpback ID catalogue for Chatham Sound and surrounding waters.

The NCCRI leads research projects in remote areas of northern BC relating to population assessments, health, and feeding behaviours to determine differences in seasonal aggregations of humpback whale populations. This team has established a Humpback Whale ID catalogue for the area and works to continually update the catalog with new whales every year. In addition to humpback research, this team has also led acoustic research of harbour porpoises and the importance of the waters surrounding Prince Rupert harbour for this small, shy species. 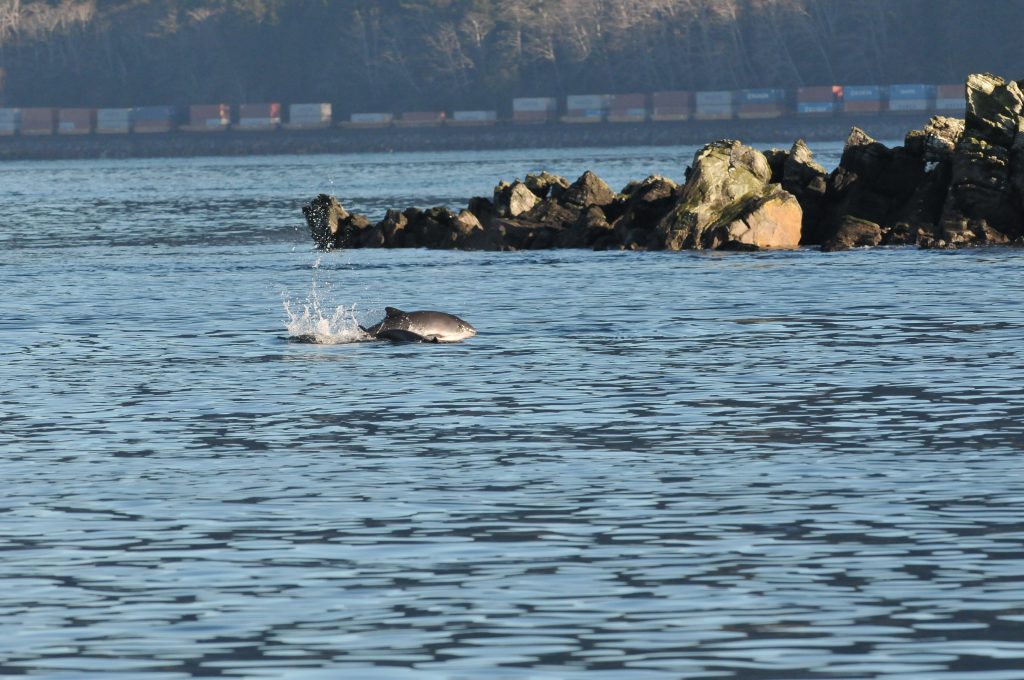 The approach to Prince Rupert harbour is an important area for harbour porpoises. Harbour porpoises are frequently seen foraging, socializing, and even mating-as seen in this photo here! 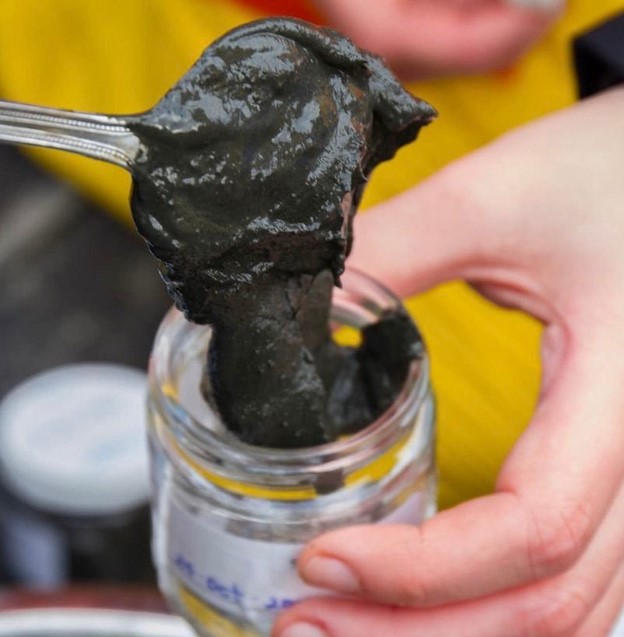 By analyzing chemical pollutants in sediment, mussels, and marine mammals, the team is able to monitor pollution levels and investigate linkages between levels of specific pollutants and observed health-related effects.

Work conducted by this team is done in collaboration with coastal B.C. First Nations and community groups to address location-specific questions and concerns regarding ocean pollution. By proceeding in this way, stakeholders are empowered to participate in the protection of their coastlines and become part of the solution. The Ocean Pollution Research Program makes a concentrated effort to communicate their findings with partners, researchers, and the public to increase general awareness surrounding contaminant presence in our waters and how these can be minimized through consumer choices and policy change.

By bringing these approaches together collectively as a team, the Whales Initiative strives to keep the whales in our waters protected from the many anthropogenic pressures facing them today. For more information on our programs and other Ocean Wise conservation initiatives, visit Homepage – Ocean Wise.

To keep up with the work going on in the Whales Initiative, follow us on Twitter and Instagram (@oceanwiseresearch) and keep an eye on our blog for exciting new research updates.

For more about World Oceans Day and to find an event near you, visit the official World Oceans day webpage: https://worldoceanday.org/. 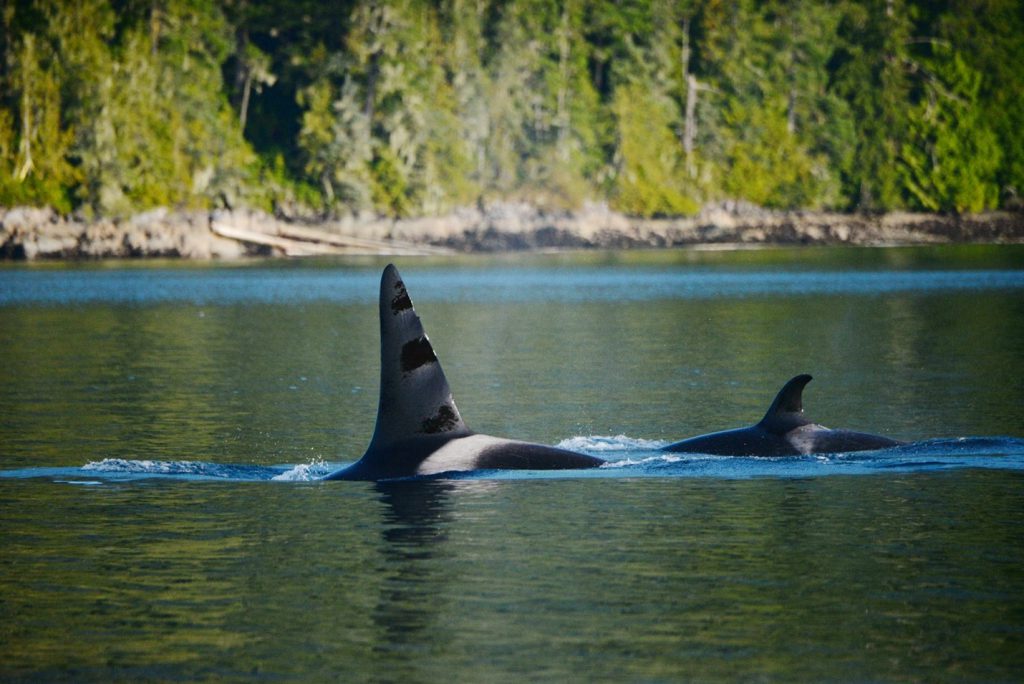