What happens when you report a dead whale? 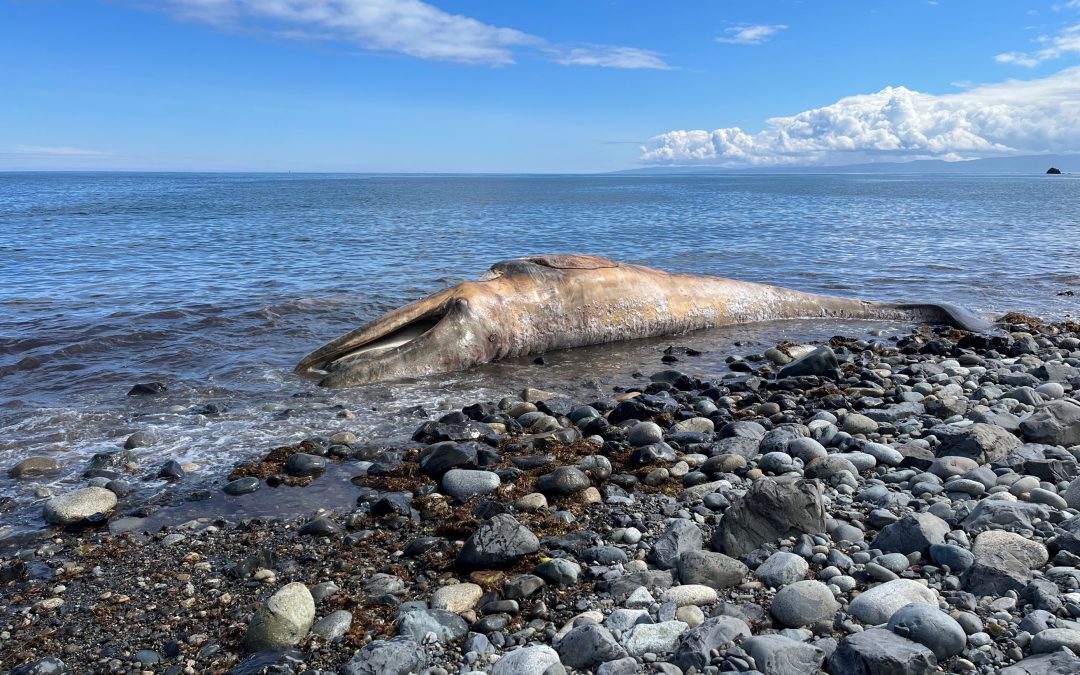 A couple of weeks ago, a 38-foot lifeless whale was spotted floating off the shore of Grey Bay. This is the story of what happened after it was called into the DFO Incident Reporting Line.

Many things wash into the intertidal zone of Haida Gwaii. On this day, the Department of Fisheries and Oceans (DFO), Haida Fisheries Guardians and I waited for the gigantic whale body to make its way to the shore. The reason: so we could learn the story of its unfortunate death. 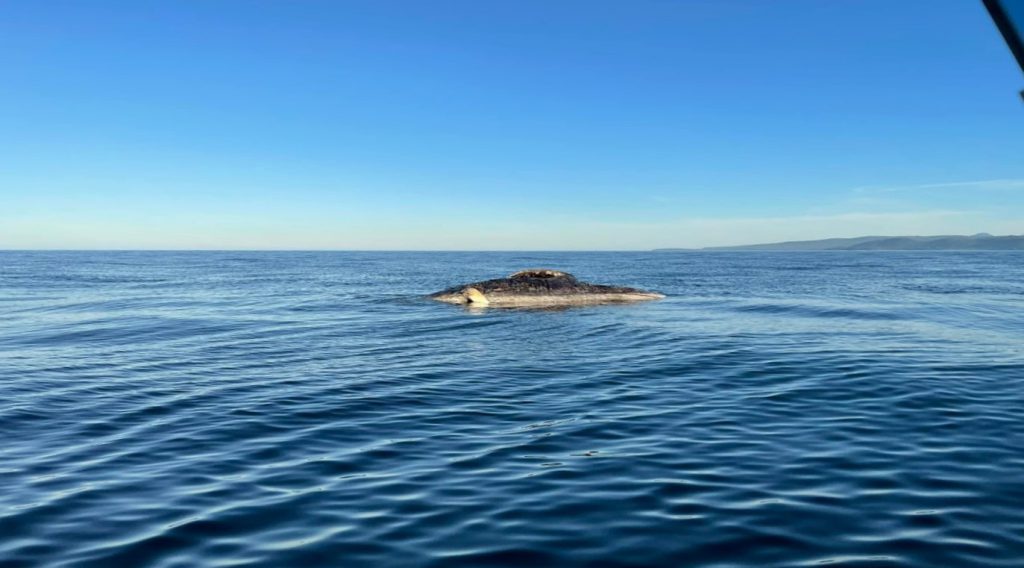 Since 2019, an international group of scientists, field biologists, and volunteers have been investigating an Unusual Mortality Event that has been killing off the world’s most impressive migrator: the grey whale. Dead grey whales have been found along the entire west coast of North America from Mexico to Alaska (NOAA) in astonishing numbers. What exactly is causing these deaths is still a mystery.

Working together to find answers 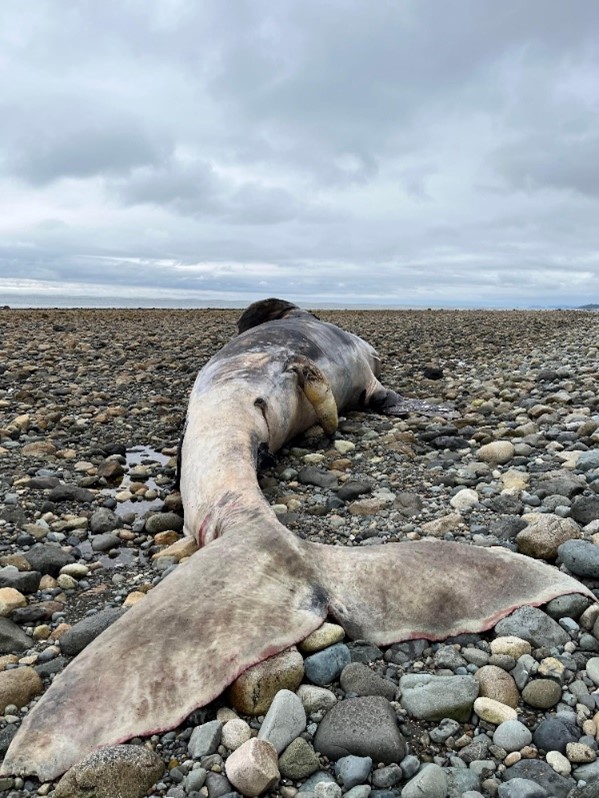 Finding answers to this mystery starts with a call from people out on the water or on the beach. In between calling-in and determining a cause of death, there are many moving parts!

After this whale was called in, DFO patrolled the area to see that it made it to shore securely. From there, the response team made a three-hour journey which included driving, a ferry ride, and some off-roading to take samples to send to the marine mammal lab.

The process of what happens when you call in a dead whale to DFO. Credit: Credit: Shanti Thurber/Ocean Wise.

The process of taking samples of a dead whale is called a necropsy. A necropsy is an animal autopsy, where you take samples of organs, bones, or other remains to find the reason behind a death.

Whale necropsies on Haida Gwaii are a collaborative effort between different fisheries representatives (in this case, the DFO and Haida Fisheries Guardians) and occasionally researchers or experts. 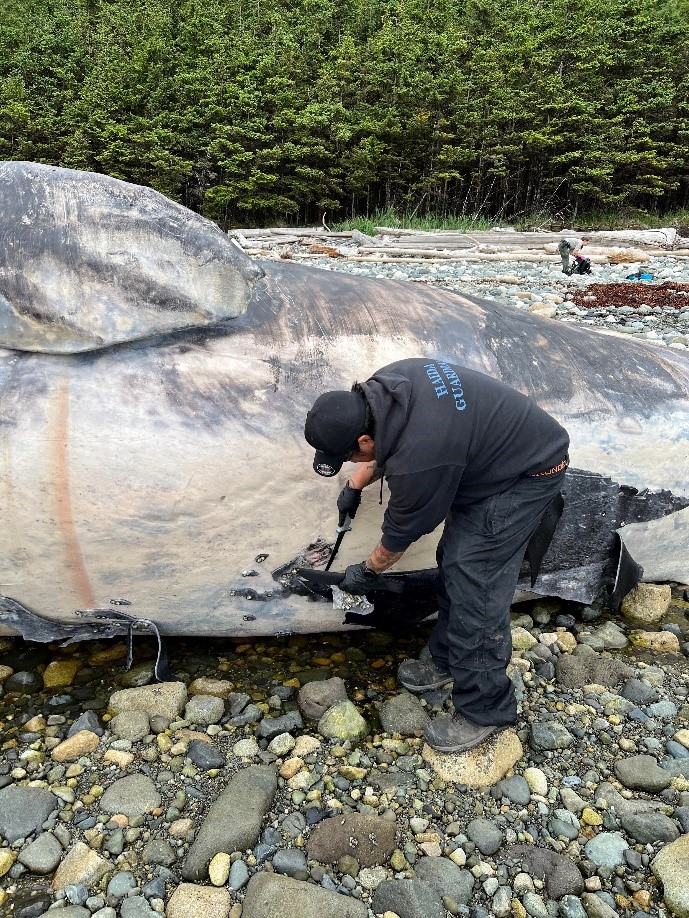 First, we looked for signs of vessel-induced trauma or entanglement, which are leading causes in large marine mammal deaths and strandings. From there, we did a partial necropsy and collected samples of skin, barnacles, whale lice, blubber, muscle, and faeces to send off to the lab. We also sent measurements, the species, and photos. With this information, the lab might be able to tell age and health condition before death.

Researchers use data from necropsies to answer a whole suite of questions regarding cetacean pathology and mortality.  For example, necropsy results have been used to understand diseases in killer whales (Raverty et al., 2004), find patterns in unusual humpback and fin whale deaths (Savage, 2017) and to learn about how marine debris is affecting marine mammals (Williams et al., 2011).

UPDATE: This however wasn’t the only grey whale mortality in recent weeks. On July 16th, another grey whale carcass was seen in the Lawnhill area. This whale was reported to DFO and is currently awaiting necropsy.

These samples will help identify cause of death and will contribute to solving the mystery of the Unusual Mortality Event.

One phone call can lead to one more answer in a sea of mysteries. If you ever find a dead marine mammal, please call the DFO Incident Reporting Line and kick-start this process of contributing to science!

If you find a dead or distressed marine mammal, please call the DFO Incident Reporting Line at 1-800-465-4336.