In the early 1970s, Dr. Michael Bigg of Fisheries and Oceans Canada was asked to count the number of wild killer whales along the coast of B.C. to ensure that the roughly 20 killer whales captured each year for display in aquaria was not impacting the population. At the time, the number of killer whales in B.C., Washington and Alaska was estimated to be in the thousands. To solve this problem, Dr. Bigg utilized two novel methods after quickly realizing each killer whale has markings on its dorsal fin and saddle patch that are unique to each individual. He began a catalogue of killer whales, documenting almost every killer whale in B.C.; a catalogue that is still evolving today.

However, to get a quick estimate of the killer whale population, Dr. Bigg took the suggestion of the first Vancouver Aquarium president, Dr. Murray Newman, who envisioned a one day public census of the killer whales across B.C. During 1971 and 1972, Dr. Bigg advertised the census through newspaper ads and radio broadcasts, and sent over 17,000 questionnaires to the boating public, asking for reports of killer whales across the province, in Washington, Oregon, California and Alaska. The public response was hugely successful. In 1971, over 550 questionnaires were returned and Dr. Bigg established an estimate of approximately 550 killer whales from southeast Alaska to California; an estimate that was proven to be highly accurate. The results put a permanent end to the capture of killer whales in Canada and the U.S.

Since then, keen members of the public have continued to report sightings of cetaceans and sea turtles in B.C. to both the Pacific Biological Station in Nanaimo and the Vancouver Aquarium. In 1999, the B.C. Cetacean Sightings Network was established to maintain these data in a consistent format that makes it valuable to researchers, NGOs and government. 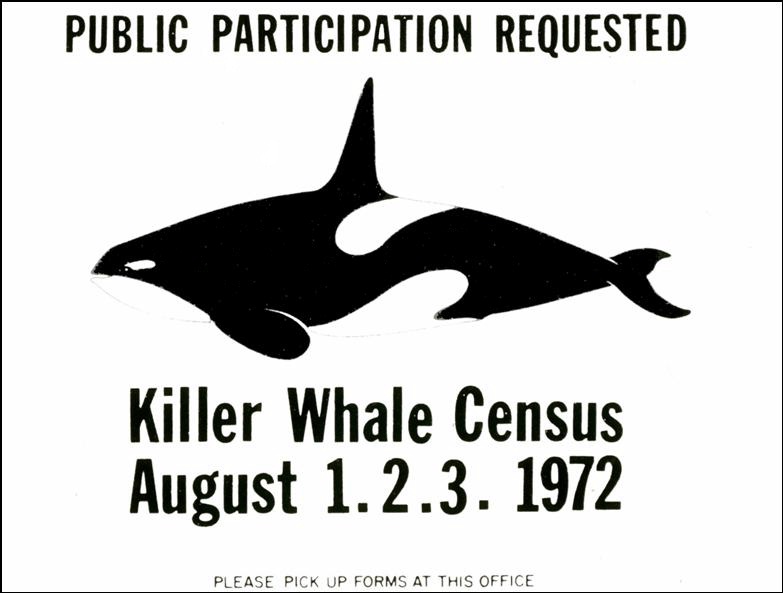 An advertisement for the 1972 killer whale census (Credit: DFO Archives)