Lorenzo has a conservation track record with cetaceans spanning two decades plus, including through his PhD on the genetics of vaquita in the Gulf of California, the conservation of which he is a part of up to this day. The last 20 years, Lorenzo has worked for the National Institute of Ecology in Mexico as Senior Researcher and Coordinator of the Marine Mammal Research and Conservation Program, with the mandate to find practical and efficient solutions, through scientific research, to the main conservation threats faced by marine mammal populations in Mexican waters. 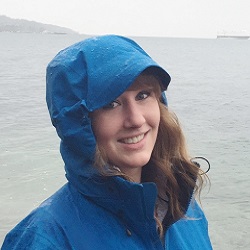 Jessica has been a member of the Whales Initiative at Ocean Wise since 2017, when she joined as the BC Cetacean Sightings Network (BCCSN) Coordinator. Jessica has been the Project Manager for the BCCSN and WRAS since 2018 and has most recently been promoted to Senior Manager for the Whales Initiative. She holds a BSc in Biology from the University of Victoria and her MSc in Marine and Fisheries Ecology from the University of Aberdeen where she studied the effects of commercial fishing on the diet and body condition of harbour porpoises in the North Sea. 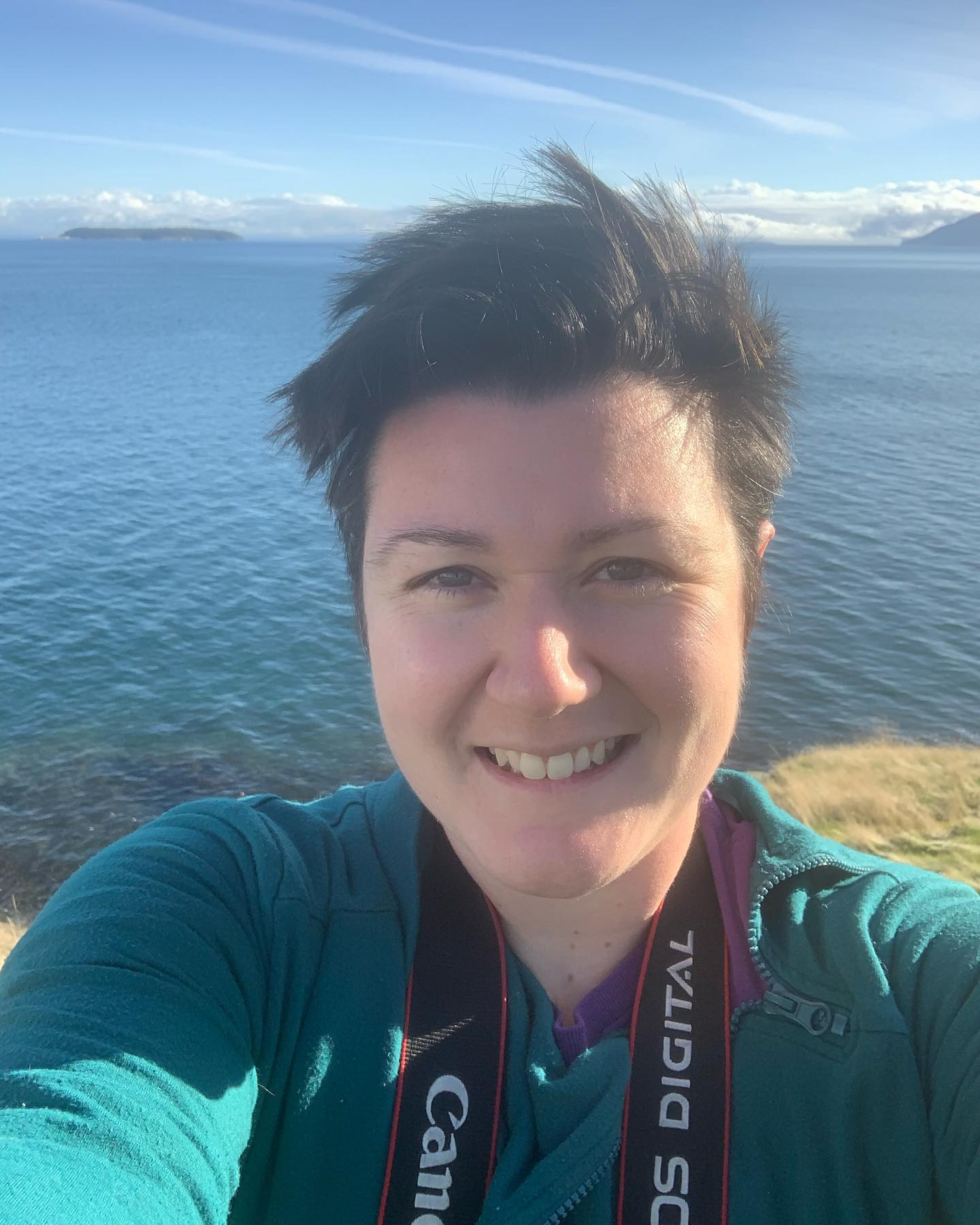 Chloe started at Ocean Wise in summer 2021, in the role of Research Manager for the Southern Vancouver Island Cetacean Research Initiative (SVICRI). She has most recently been promoted to Senior Manager of Conservation Impact for the Whales Initiative. She holds a BSc in Zoology, MSc in Environmental Biology and a PhD in Molecular Ecology from Swansea University. Chloe’s research at Ocean Wise involves the application of non-invasive tools for cetacean monitoring, namely acoustics, DNA, and land-based citizen science. 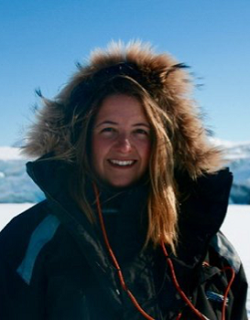 Karina started as a Research Assistant with Ocean Wise in 2017, before being promoted to Research Manager for the North Coast Cetacean Research Initiative (NCCRI) in 2020. After finishing her undergraduate degree in Geography at the University of Victoria she moved to Iceland to complete her Masters in Coastal Resource Management from the University of Akureyrei. Previously, Karina interned with the Canadian Hydrographic Service as a geospatial analyst and most recently worked in South Africa for Sustainable Seas Trust on issues of marine waste. Her primary research focus is on marine mammal species at risk with an emphasis on harbour porpoise and humpback whales in Northern BC. 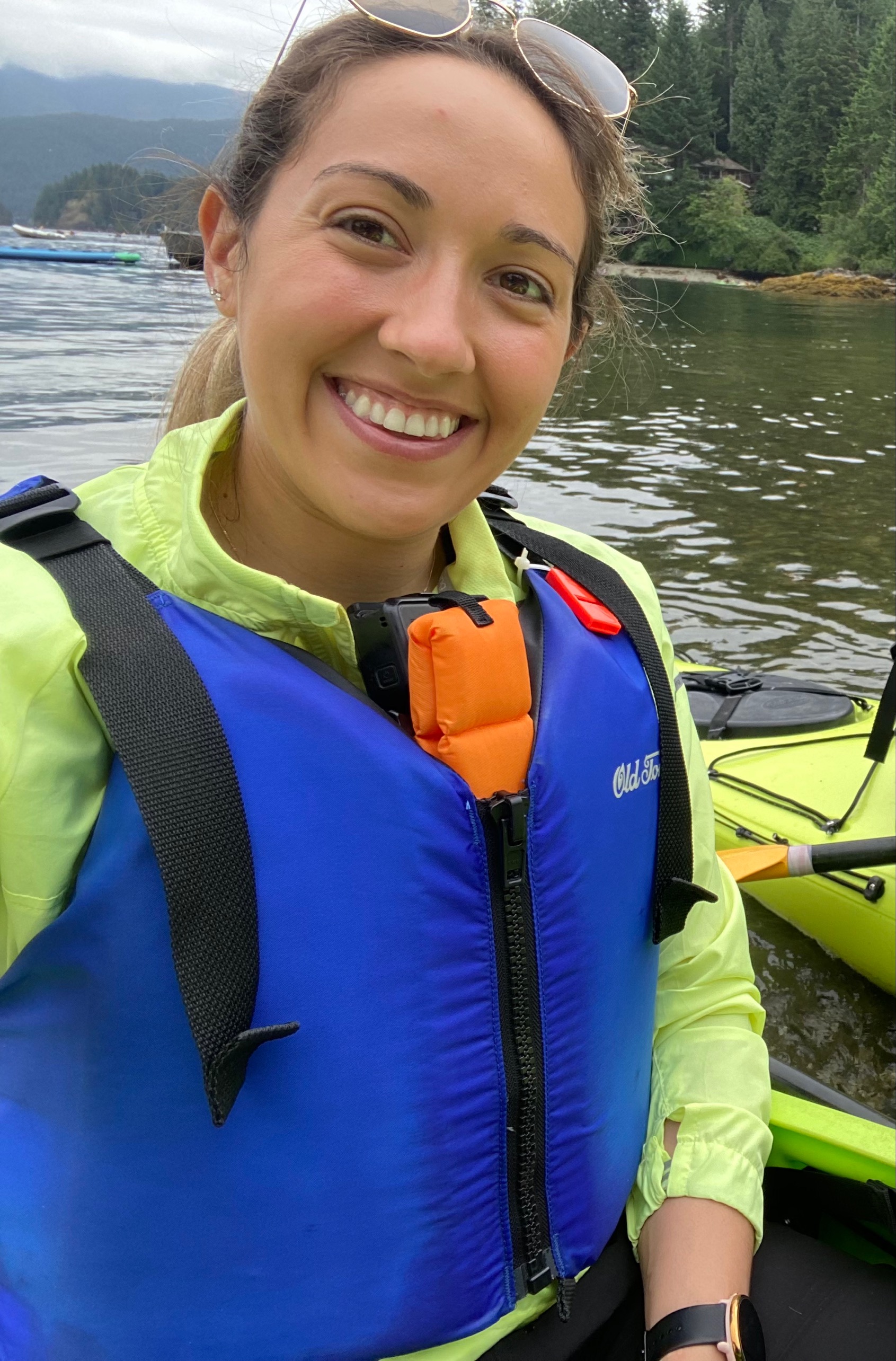 Ashley joined Ocean Wise in spring 2022 as the Coordinator for the North Coast Cetacean Research Initiative (NCCRI). Prior to joining Ocean Wise, Ashley held several progressive roles within marine research and biology through various roles and internships, some of which include marine naturalist with Prince of Whales, observing and studying Flatback turtles in Australia, conducting baseline data monitoring programs in the remote Kimberly Region of Western Australia and the Great Barrier Reef, and intern with the marine mammal team at the Aquarium of Niagara. She holds a BSc in Marine and Freshwater Biology with a minor in Business Administration from the University of Guelph. 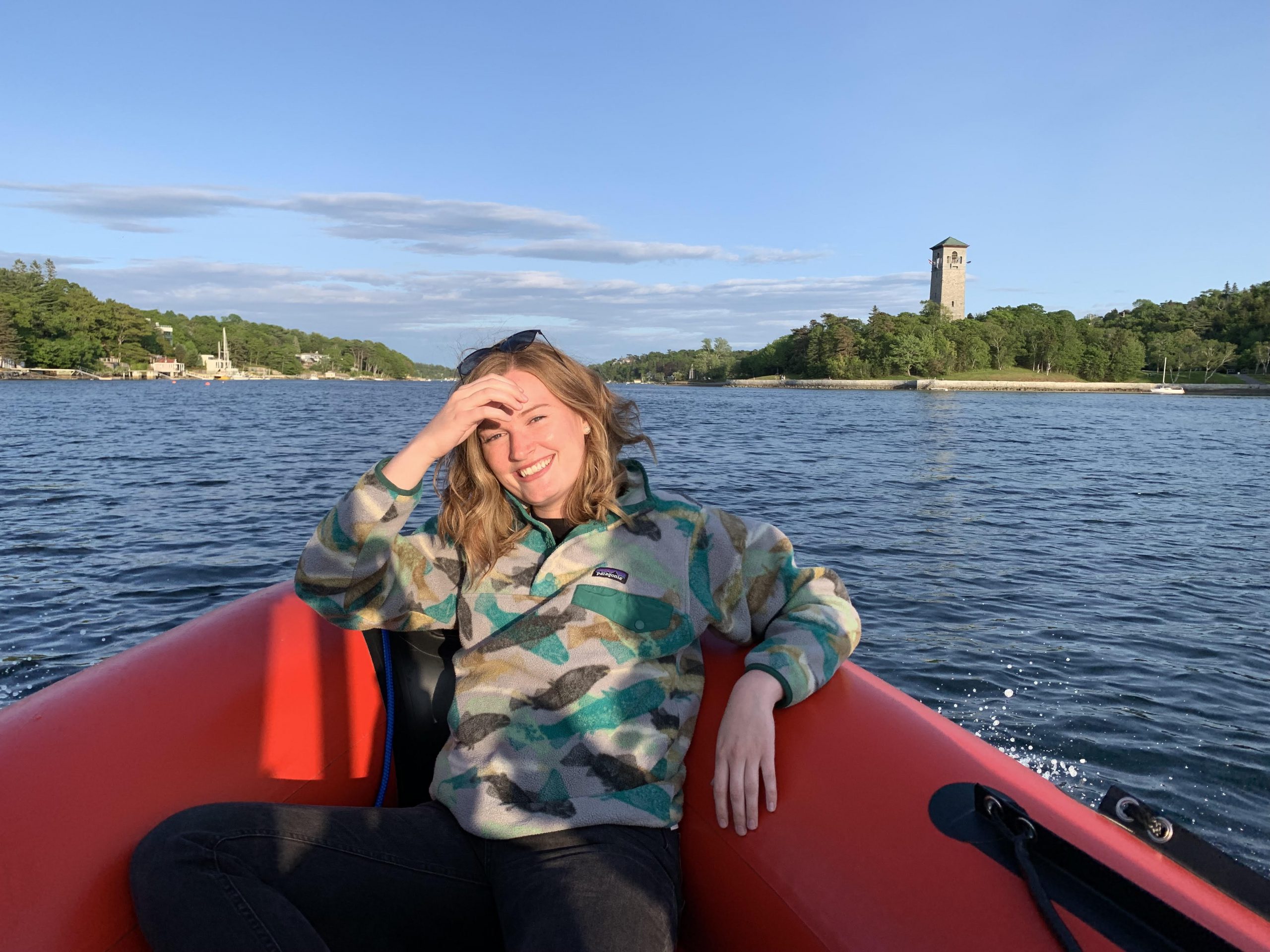 Amy started at Ocean Wise in spring 2022 as a Research Biologist for the North Coast Cetacean Research Initiative (NCCRI). She holds a BSc in Marine Biology from Dalhousie University in Halifax, NS, and an MSc in Marine Biology from University College Cork, Ireland. For her MSc. Amy studied the diving and foraging behaviour of leatherback sea turtles. She has previously worked as a marine biologist in both Canada and Ireland, contributing to multiple conservation related projects from protecting deep sea corals to studying the distribution and health of large marine animals. In her current role at Ocean Wise, Amy is involved with several projects in Northern B.C, with a focus on studying humpback whale and harbour porpoise populations. Sally started at Ocean Wise in the summer of 2022 as an Outreach and Research Assistant to the North Coast Cetacean Research Initiative (NCCRI) and she is currently an Ocean Bridge Direct Action participant. She holds a BSc in Marine Biology from Newcastle University and more recently graduated with a Post Degree Diploma in Applied Coastal Ecology. She has worked as a Naturalist since 2017 in both Scotland and BC, as well as assisting with marine mammal research projects in Portugal and volunteering with Vancouver Aquariums Education and Outreach department. 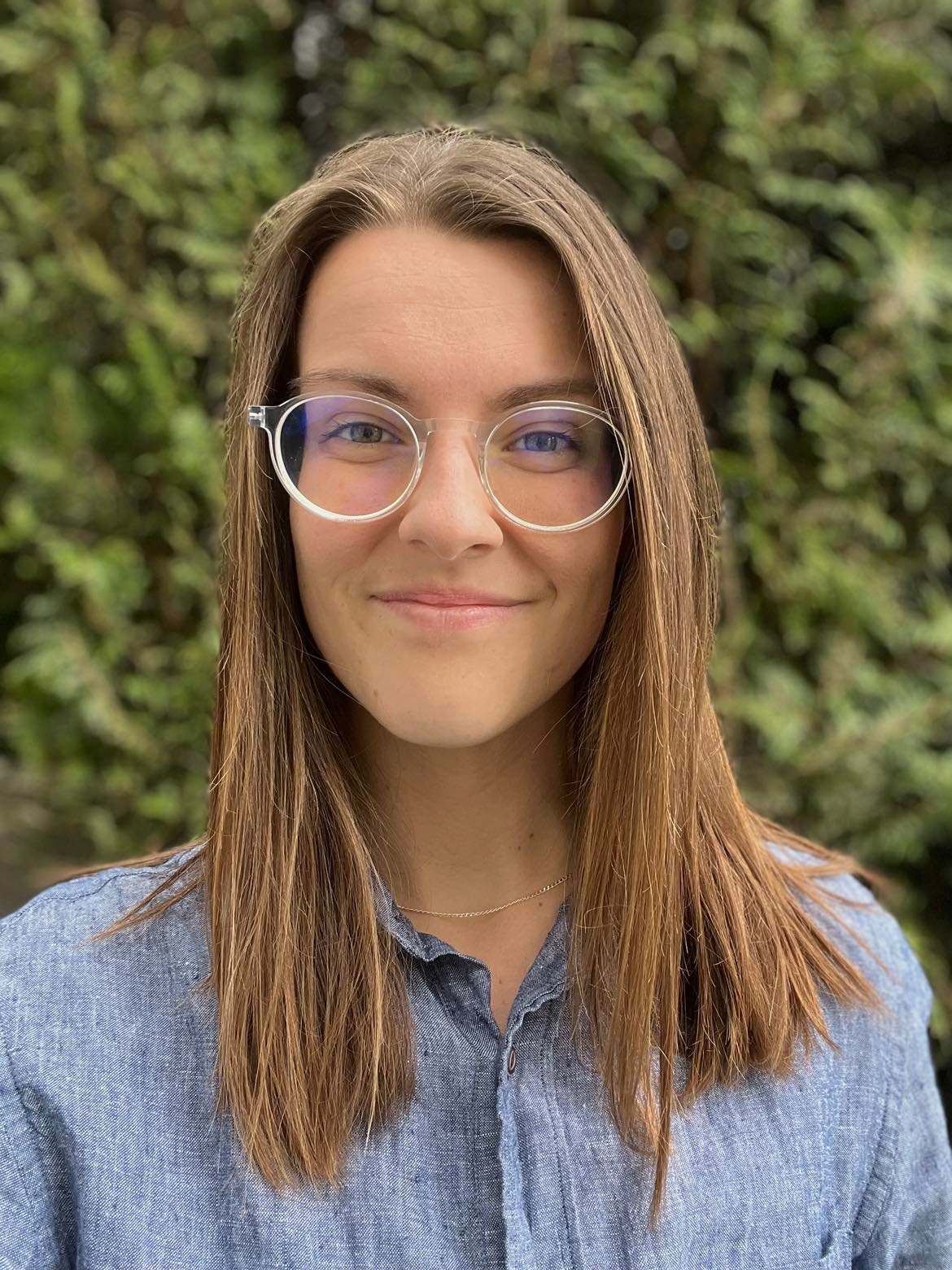 Shanti started at Ocean Wise in the spring of 2022 in her current role of Haida Gwaii Coordinator.  As the only staff member located permanently on Haida Gwaii, Shanti works to advance Ocean Wise’s presence and build relationships on-island. Shanti holds a B.A in Philosophy and Sustainable Development, and a Master’s of Community and Regional Planning. Since the beginning of her Masters, Shanti’s research and professional goals have centered around facilitating Indigenous-non-Indigenous partnerships in environmental decision-making. 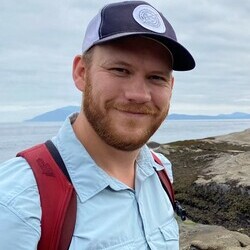 Aaron joined Ocean Wise in 2019 as the Outreach and Education Lead for the Southern Vancouver Island Cetacean Research Initiative (SVICRI). He works to promote the BCCSN, educate BC residents about whale conservation, and coordinate community-led research in the Southern Vancouver Island area. Since completing his BSc in Zoology from the University of Calgary, Aaron has worked both as a researcher and educator in the non-profit sector. He graduated from the University of British Columbia in 2019 with a MSc in Zoology where he studied the diving physiology of Steller sea lions. Kayla joined Ocean Wise in 2021 as a Research and Outreach Assistant with the Southern Vancouver Island Cetacean Research Initiative (SVICRI) after having completed her BSc at the University of Victoria in 2020. In this role, she contributed to projects related to harbour porpoise behaviour in Boundary Pass and use of the WhaleReport app among citizen-scientists while leading outreach events across Vancouver Island and the Southern Gulf Islands. As of 2022, Kayla has been the Coordinator for the BCCSN. In her current role she works to educate stakeholders on the WhaleReport Alert System and the importance of mitigating vessel disturbance to cetaceans, organizes and participates in events that promote whale conservation, and processes cetacean sighting reports submitted to the BCCSN. Paige began volunteering with Ocean Wise in 2021, conducting harbour porpoise surveys from Saturna Island while she completed her BSc in Marine Biology and Ocean Sciences from the University of Victoria. She then joined Ocean Wise in the summer of 2022 as an Outreach Assistant for the Southern Vancouver Island Cetacean Research Initiative (SVICRI) where she aims to educate boaters about safe boating practices around marine mammals and recruit new citizen scientists through use of the WhaleReport app. Paige has worked as a naturalist and as a research assistant, focusing on everything from small forage fish to the complex synchronicity of humpback whale bubble net feeding events. Bobby joined Ocean Wise in 2018 as a member of the Children and Youth Programs team before finishing his BSc in Biology at UBC and joining the Whales Initiative as a Research Assistant in 2022. He works to educate residents on the southern coast of BC about whale conservation and encourages the reporting of cetacean sightings by attending community festivals and conducting outreach wherever water is near. He also supports research initiatives by processing data from the WhaleReport app and creating pilot projects to investigate potential future research opportunities. 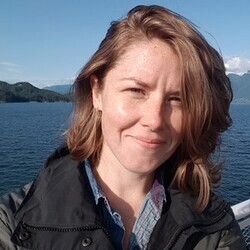 Lauren joined Ocean Wise in 2019 and currently works for Ocean Wise on a contract basis alongside her role as a Postdoctoral Fellow for Fisheries and Oceans Canada (DFO).  She supports the Whales Initiative team with sightings data analysis, GIS mapping and management of the BCCSN database.   Prior to starting with the BCCSN, Lauren completed her PhD at Trent University, focusing on the ecology and conservation of Indo-Pacific humpback dolphins in Hong Kong and Taiwan.