Cetaceans are very susceptible to serious injury and mortality from vessel strikes.

The waters of British Columbia are host to high densities of both cetaceans and marine traffic1.  Vessel strikes are a recognized cause of mortality for cetaceans worldwide, and pose a real risk to many species found in B.C. waters2.

Thirty cetacean-vessel collisions were reported to the B.C. Marine Mammal Response Network hotline and investigated by Fisheries and Oceans Canada from 2004-2011. These collisions involved killer whales, humpback whales, grey whales, fin whales, and harbour porpoise3.  The majority of these witnessed and reported strikes involved smaller vessels (less than 15m); however, the involvement of larger vessels is likely underreported, as they are less likely to detect a strike.  Many strikes undoubtedly go undetected, especially by large vessels or those involving small species, resulting in an underestimation of this threat in B.C.

Humpback whales experience the second highest strike rate of any whale species and are the most commonly struck cetacean in B.C. This is due to their relative abundance and their tendency to feed on or near the surface4.  Fin whales are the most commonly struck cetacean species worldwide4, and vessel strikes are the greatest human-caused threat to fin whales in BC.  Fin whales are commonly distributed along the shelf break in locations that frequently coincide with shipping lanes5. The endangered blue whale is also particularly vulnerable to ship strikes due to their tendency to feed at the surface and their slow and shallow dive response to vessels6. 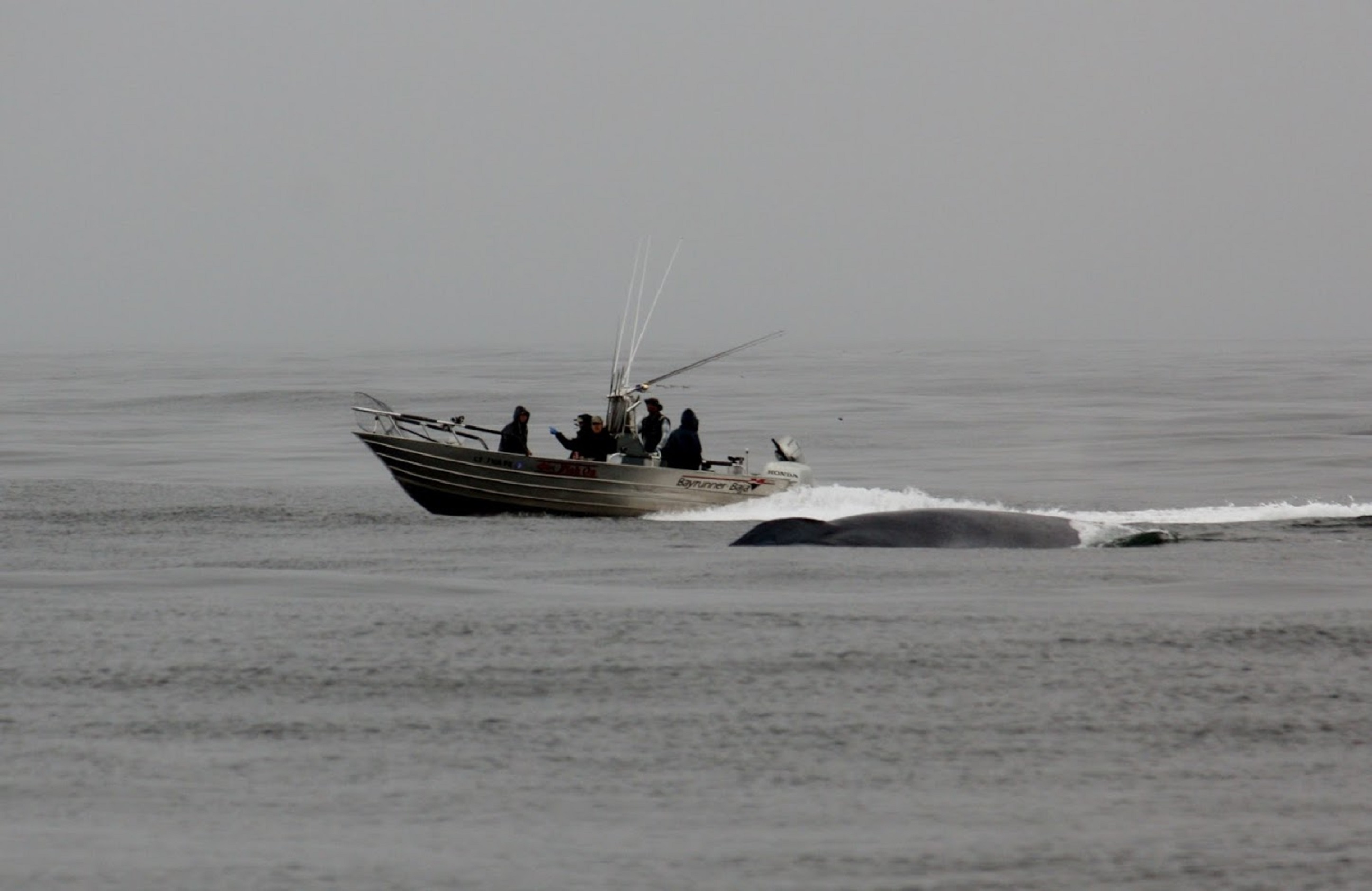 A small recreational vessel narrowly misses a surfacing blue whale.  Blue whales and other baleen whales such as fin whales and humpback whales are vulnerable to ship strikes due to their tendancy to feed at the surface and their slow response to approaching vessels (Photo credit: Carla Crossman).

Ship strike also poses a risk to smaller cetaceans. In April 2011, Pacific white-sided dolphins foraging in Howe Sound displayed the tell-tale scars and injuries inflicted from a boat propeller. In December of 2016, a southern resident killer whale J34 (Double Stuf) was found floating dead near Sechelt. A necropsy indicated that blunt force trauma from a ship strike was the most likely cause of death for this animal.

Studies have shown that while all vessel types are implicated in vessel-cetacean collisions, those involving large and fast-moving vessels have a more severe impact and pose a higher risk of mortality for cetaceans 4 . Reducing speed in areas where vessels and cetaceans overlap may decrease the probability of a strike, as slower speeds increase the likelihood of detecting and avoiding cetaceans and allows more time for the animal to respond and avoid the oncoming vessel. Studies have demonstrated that travel below 10 knots greatly decreases the likelihood of vessel strikes 2 . Cetacean-vessel collision also poses a serious risk to boaters.In May 2013, a humpback whale unexpectedly breached in front of a boat, cracking the hull and sending the boat’s operator through the windshield. You can read the story here .

Understanding the distribution of cetaceans helps identify and map high-risk areas for vessel strikes, and a large amount of this valuable data comes from sightings reported by coastal residents and mariners. You can help researchers learn more about high density whale areas by reporting your sightings. In 2018, the BC Cetacean Sightings Network launched  the WhaleReport Alert System . This system uses real-time sightings, reported by observers using the WhaleReport app , to alert large commercial vessels of whales in their vicinity. This awareness will better enable vessels to undertake adaptive mitigation measures, such as slowing down or altering course in the presence of cetaceans, to reduce the risk of collision and disturbance. 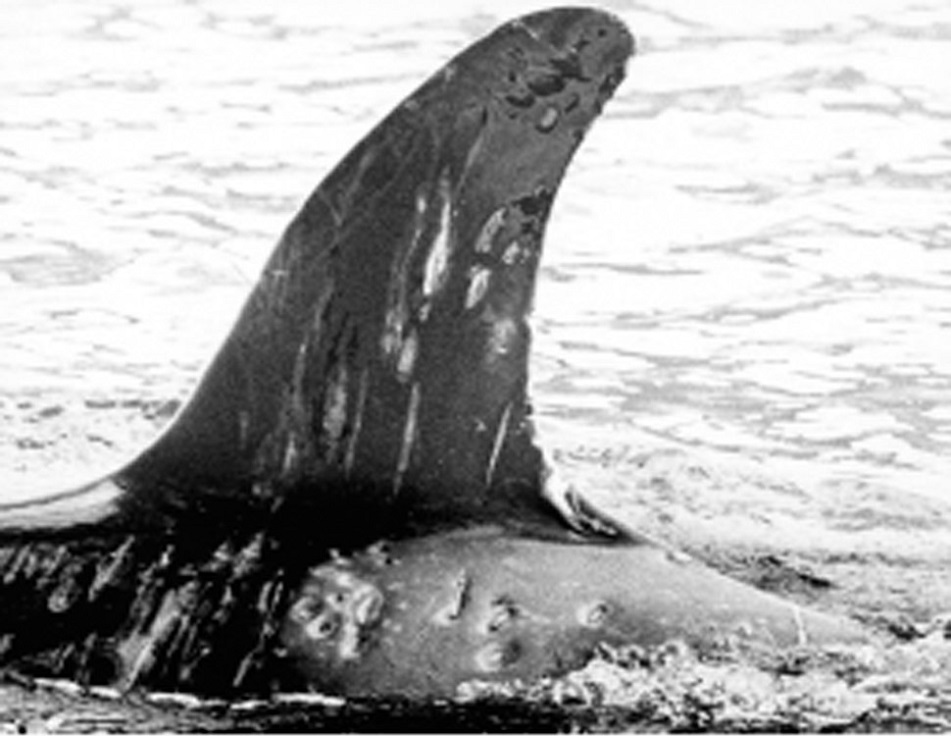 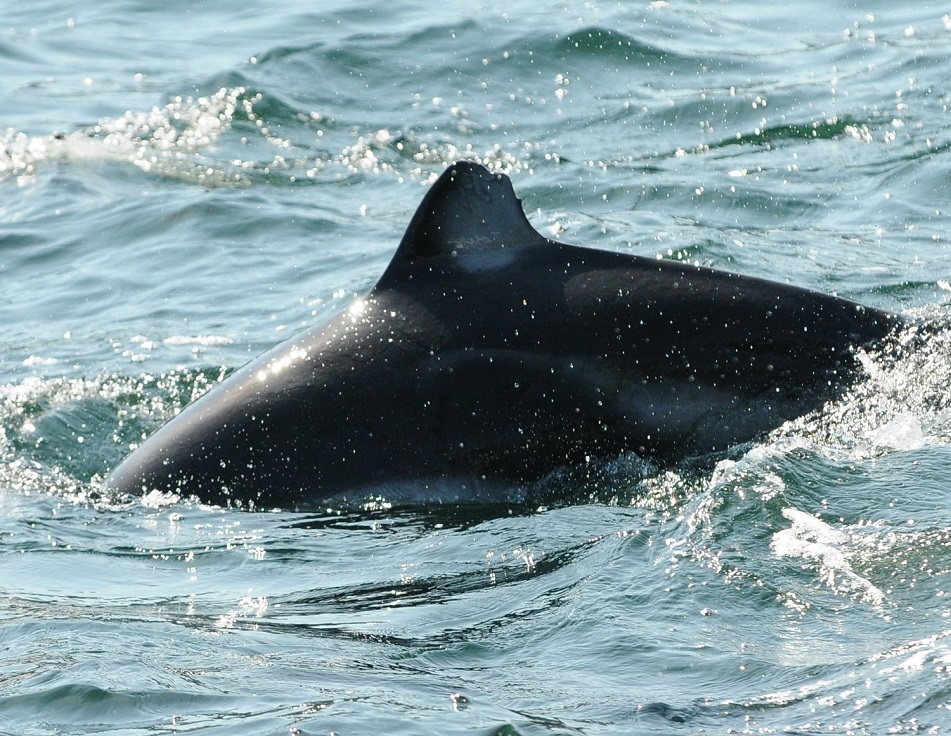 This humpback whale, known as “Slash” has a a severed dorsal fin and scars along his back from a boat propeller. (Photo credit: Jared Towers)

What you can do:


Follow the Be Whale Wise Guidelines when out on the water.  Slow down to less than 7 knots when within 400m of whales.  Do not approach any marine mammal within 100m (200m for killer whales).

If you belong to a professional marine organization and are a pilot or member of the bridge crew of a ship, use the WhaleReport Alert System to receive real-time alerts of whales in your vicinity.  As well, review our Mariner’s Guide to Whales, Dolphins, and Porpoises of Western Canada.

In areas of known cetacean activity, reduce speed and keep a lookout for signs of whales, dolphins, and porpoises.  Remember-whales don’t always know where you are, and they can surface unexpectedly!  Learn more about the Marine Education and Research Society’s See a Blow Go Slow campaign here.