Environmental pollutants are a serious threat for many marine mammals.

How do pollutants enter our oceans?

Typically, contaminants enter the marine environment through industrial and agricultural runoff. Various airborne pollutants can also enter marine systems through atmospheric transport and deposition in which contaminants are deposited directly into the environment and/or via rainfall, snow or fog.

POPs are the main contaminants causing concern for the health of marine mammals. POPs include toxic contaminants – such as polychlorinated biphenyls (PCBs), dichlorodiphenyl trichloroethane (DDT), polybrominated diphenyl ethers (PBDEs), mercury, dioxins and furans – that remain in the marine environment and build-up within the fatty tissues of marine organisms. POPs are absorbed at a faster rate than they are excreted, causing them to accumulate within organisms over time – a phenomenon known as bioaccumulation. The concentration of POPs increases at every step of the food web, because predatory animals acquire the POPs from all the organisms they eat. This leads to a biomagnification of POPs throughout the food web, whereby top predators, such as killer whales (Orcinus orca), end up with extremely high concentrations of pollutants within their fatty tissues.

These pollutants have many adverse health effects on cetaceans – affecting their reproduction, development, endocrine and nervous system – ultimately increasing their susceptibility to cancer, pathogens and diseases.

Studies have shown that killer whales are some of the most contaminated marine mammals in the world.

Killer whales are apex (top) predators in the ocean’s food web and consequently receive high contaminant loads from their prey.

Accumulation up the food web

Cetaceans are particularly vulnerable to Persistent Organic Pollutants (POPs), as they will accumulate in their thick layer of blubber. These toxins are difficult to metabolize and eliminate, especially in long-lived top predators – such as killer whales (Orcinus orca) – who feed higher up the food chain12, 13, 14. In fact, studies have shown that killer whales are some of the most contaminated marine mammals in the world14, 15, 16. Killer whales are apex (top) predators in the oceans’ food web, and consequently receive high contaminant loads from their prey. Research by the Coastal Ocean Research Institute’s Dr. Peter Ross has shown that Bigg’s (transient) killer whales, which prey on marine mammals, have the highest level of PCBs compared to resident, fish-eating killer whales13.

In addition to accumulating more pollutants as they move up the food chain, cetaceans also gain more pollutants over time. PCB concentrations have been shown to increase with age in both resident and Bigg’s killer whales13, 17. Mongillo et al.18 found a similar trend in PBDEs; PBDEs increase over time as an individual ages, with concentrations doubling in individuals every three to four years.

POPs are not only acquired by consuming contaminant-laden prey, but are also passed from female to calf during gestation and nursing through their rich, fatty milk. A killer whale female’s first calf receives the largest contaminant load compared to the load received by subsequent calves16. While this transfer of contaminants from female to calf may be very harmful for the calf, it does mean that females reduce their contaminant load significantly every time they rear young16, 19. This release of toxins through lactation implies that the POP load of juveniles can be much higher than their mothers19.

The transfer of pollutants from female to calf has also been observed in other species of cetaceans. Using earwax from a stranded six-month-old blue whale calf, Trumble et al. found that the calf had already accumulated approximately 20% of the total amount of POPs a blue whale (Balaenoptera musculus) would have in its body over an entire lifetime20. They suggested that for this to have occurred, a significant amount of pollutants must be passed from female to calf within the first twelve months of life. Desforges et al. found that female beluga whales (Delphinapterus leucas) in the St. Lawrence pass along a larger concentration of POPs to their offspring, not just through lactation21, but also via transplacental transfer 22. This study found that female belugas transferred 11.4% of the PCBs and 11.1% of the PBDEs within their blubber to their fetuses in the womb.

Noe even the Arctic is safe from pollutants

The Arctic is a region that appears seemingly untouched by modern human existence – sadly, this is not the case. POPs from all over the world arrive in the Arctic via atmospheric and oceanic circulation. Consequently, top predators – such as belugas, narwhals and polar bears – accumulate large amounts of contaminants, the way killer whales and other marine mammals do in southern latitudes closer to direct pollution sources24. Not just top predators are exposed to pollutants in the Artic, even baleen whales that feed on krill and smaller fish obtain high contaminant loads. Artic minke whales (Balaenoptera acutorostrata) that feed at lower levels of the food web – foraging mainly for krill, herring and capelin25 – are still subjected to accumulating high levels of pollutants. Minke whales in the Arctic contained 1.5 to 7 times higher levels of POPs than minke whales observed off of Japan, the North Sea and the North Atlantic26.

The toxic problem with food scarcity

Contaminants are problematic for cetaceans in years of limited prey availability. POPs that have accumulated in their fatty tissues (blubber) can be mobilized in years of food shortage, when these fat stores are metabolized for energy27. Once these fat tissues are broken down, the stored POPs are released causing higher concentrations of toxins within the body.  Fat stores are also mobilized more readily during lactation, causing high contaminant loads to be passed from female to calf – and contaminant loads especially high for the female’s first-born calf27. For southern resident killer whales, a decrease in salmon abundance is related in increased periods of mortality28 and a decrease in females producing new calves 29. 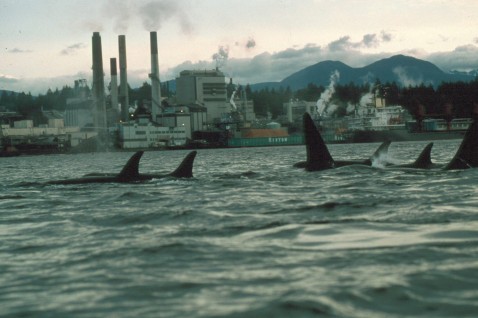 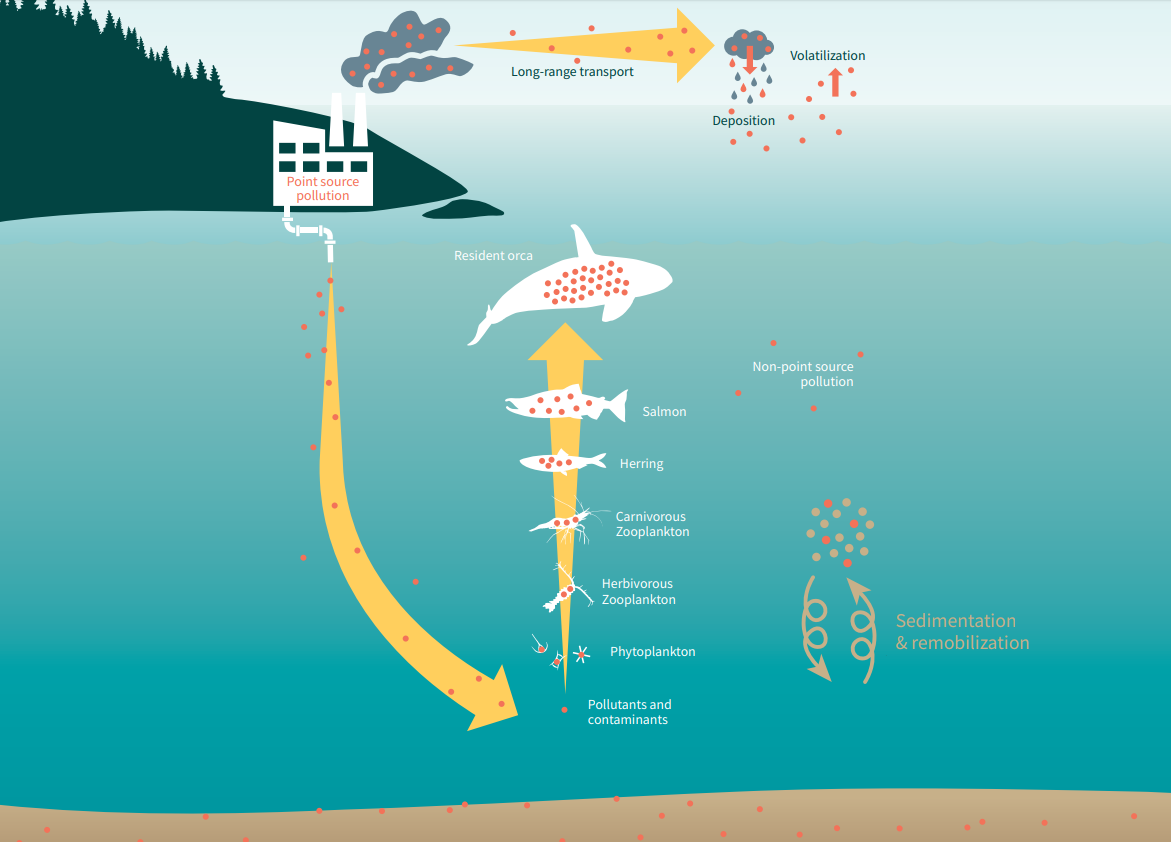 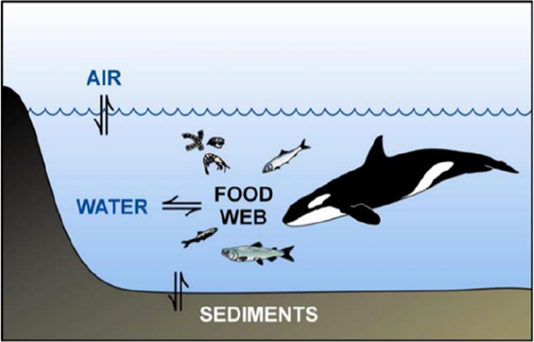 Contaminants move after entering the marine environment, and sediment has been shown to be both a place of “storage” and a subsequent “source” of contaminants, making it an important component of marine contaminant monitoring. Through deposition and resuspension of sediment, contaminants are stored and remobilized, respectively, re-exposing aquatic organisms (Alava and Gobas, 2016).
Read the Ocean Watch Spotlight Report - Pollution in Killer Whale Habitat Pinpointed by New Conservation Tool

Oil spills are a major threat to marine life, especially for cetaceans that must interact with the surface to breathe. Cetaceans do not appear to avoid areas affected by oil. They have little, if any, sense of smell and are unable to detect oil vapour in the air. While they do have excellent eyesight, they do not appear to recognize surface oil as a hazard. Oil vapour is very toxic and causes respiratory distress when inhaled. Furthermore, cetaceans are in danger if they eat oiled prey. Bigg’s (transient) killer whales can consume oil adhering to the bodies and fur of their mammalian meals, and ingestion of oil can cause serious long-term damage to internal organs30. Harbour porpoise are a high-risk species for oil spill due to their high preference for squid, which is highly susceptible to being coated in oil. Baleen whales are particularly vulnerable to oil while surface feeding, as oil may stick to their baleen while they “filter feed” near oil slicks30. Oil spills affect cetaceans at the population level, due to dramatic losses of individuals. These deaths have drastic long-term effects on the population, and years can go by before the population begins to recover. In addition to increase mortality rates, cetaceans exposed to oil have been shown to have reduced reproductive success and many long-term health effects that make them more susceptible to pathogens31. The 1989 Exxon Valdez disaster in Alaska sadly illustrated the damaging effects of oil spills on killer whale populations. Alaska’s AB resident killer whale population was photographed in an oil slick shortly after the spill, and suffered the loss of 33% of its members within a year32. Its rate of reproduction has been lower than average ever since, and the pod fractured following the death of a matriarch. Members of the AT1 transient population were also photographed in oil from the Exxon Valdez, and 41% of its members were lost in the following year. There has been zero reproduction in this group since the spill and this genetically distinct transient population is on the verge of extinction with almost no chance of recover

The Government of Canada has aided in measures to reduce the release of POPs through stricter regulations regarding disposal of chemicals and wastewater discharge. PCBs have been banned from use in North America since the 1970s; PBDEs are prohibited in Canada under the Prohibition of Certain Toxic Substances Regulations, 2012 ; and the Canadian government has implement measures to reduce emissions of dioxins, furans and mercury33. In addition, the Government of Canada is working with other countries to reduce POPs from outside sources. The ban on PCBs in the 1970s appears to have been effective at reducing the amount of PCBs in the marine environment. Concentrations of PCBs within marine sediments have begun to decrease due to reduced input from human sources and through the natural process of sedimentation – the burying of sediments. The reduction of PCBs within the marine environment is seen in killer whales born after the ban, which are not accumulating higher concentrations with age18. However, acts such as marine dredging or natural displacement due to benthic organisms can release these toxins back into the water column to reenter the food web, which is one of the reasons PCBs are still present in the marine environment today. Possible solutions to reduce the risk of POPs with marine sediments reentering the water column involve disposing highly contaminated sediments in non-critical areas containing high sedimentation rates in order to bury contaminants – limiting their release into the food web34. To improve overall water quality, the Government of Canada introduced the Wastewater System Effluent Regulations in 2012, which placed stricter regulations on wastewater treatments. These protocols must be implemented by high-risk treatment facilities starting in 2020, with all facilities meeting regulations by 2040. As wastewater is the main source of PBDE contamination, these regulations were made to reduce their concentrations within the marine environment. Under the Environmental Response System, the Government of Canada has put protocols in place to respond to an oil spill. Under this mandate, dedicated teams based out of Victoria, Richmond and Prince Rupert are available 24-7 to respond to an oil spill. Oil spills are reported directly to the closest regional Canadian Coast Guard Station – in B.C., this would the Pacific Station (1-800-889-8852). In addition, the Government of Canada also employs the National Aerial Surveillance Program to conduct aerial surveillance to better detect oil spills in Canadian waters. Canada’s Marine Oil Spill Preparedness and Response Regime of the Environmental Response System makes polluters accountable for their spills, and responsible for the cleanup and response costs. Furthermore, all ships transiting Canada waters and all oil-handling facilities must have an oil response plans in place.

Today marks the international celebration of World Oceans Day. Originally brought to fruition in 1992 at the United Nations Earth Summit held in Rio de Janeiro, the goal of the day was to inspire appreciation and stewardship of the ocean. By 2008 the UN General...
Read More

By: Joseph Kim, Research Scientist Contaminants in coastal British Columbia (BC) It is late at night and I notice that more data have been uploaded to the PollutionTracker database. I am using these data to look at contaminant levels within and around killer whale...
Read More

PBDE’s: From the household to the ocean

By Isabelle Groc In the 19th century, humans used whale oil to illuminate city streets and houses. While whales are now protected from the exploitation of their blubber, they are tragically faced with another danger related to flammability and human activities....
Read More