Depredation causes economic loss for fishermen, places increased pressure on fish stocks, and can lead to injury or mortality for whales.

Depredation (removal of fish caught on fishing lines) by toothed whales is a widespread problem in many oceans around the world. Negative impacts of depredation include economic losses to fishermen, increased pressure on fish stocks, and injury or mortality to whales. Anecdotes regarding incidents of depredation by Killer whales ( Orcinus orca ) and Sperm Whales ( Physeter microcephalus ) are relatively common on the coast of British Columbia among halibut, black cod, and salmon fishermen, and appear to be increasing. Hook and line fisheries appear to be the most frequently targeted, although fisheries using pots or trawl gear can contribute to the problem by discarding offal and releasing bycatch in the presence of whales.Cetaceans are highly intelligent and social, and once learned, these behaviors are very difficult to extinguish and may spread to other members of a population. While the issue may not be large here in British Columbia (yet), prevention is key to ensuring fisheries are not significantly impacted and collaboration can help to prevent expansion.

THE PROBLEM: The principle problem posed by depredating whales to fishers is the loss of catch, costing potentially tens of thousands of dollars a day. One fisherman in Tasmania estimates that he loses about $ 7,700 US per day when killer whales target his boat. Near the Crozet Islands, the Patagonian toothfish fishery loses nearly $ 5 million a year to killer whale and sperm whale depredation (Roche et al 2007). Gear damage, by comparison, has been relatively minor and rare, and the whales do not appear to pose a danger to fishers. In BC there are increasing reports of fish snatched from lines, especially from sport fishermen. Depredation by killer and sperm whales is not widespread in BC yet, but appears to be increasing, and could become a serious problem in the coming years. At present, the fisheries most affected are commercial salmon trollers and sport fishers targeting chinook and coho salmon. Several incidences of depredation are reported each year, but likely many events go unreported. Anyone who experiences a depredation event by whales or dolphins should  report it  so that scientists and managers may learn more about when and where this problem is occurring.

THE SOLUTION:   In 2006, an International Depredation Symposium was hosted by the cetacean research department at the Vancouver Aquarium. This initial symposium developed guidelines for fishermen and fisheries managers affected by killer whale and sperm whale depredation.

In February 2018, Ocean Wise’s Marine Mammal Research Program held follow-up workshop which brought together fishers, managers, and scientists to continue this discussion of whale depredation, and develop a clear direction forward for British Columbia. As a result of the workshop, Pacific Halibut Commission logbooks will be used to formally record depredation events in BC. This data will be used to develop a baseline of the issue in BC, and will track geographic and temporal patterns of depredation along the entire west coast .

Preventing depredation events before it can become widespread in an area is key. Two handouts were created after the 2018 workshop to provide information and outline best practices for recreational and sport fishermen. Tap the images below to download a copy. 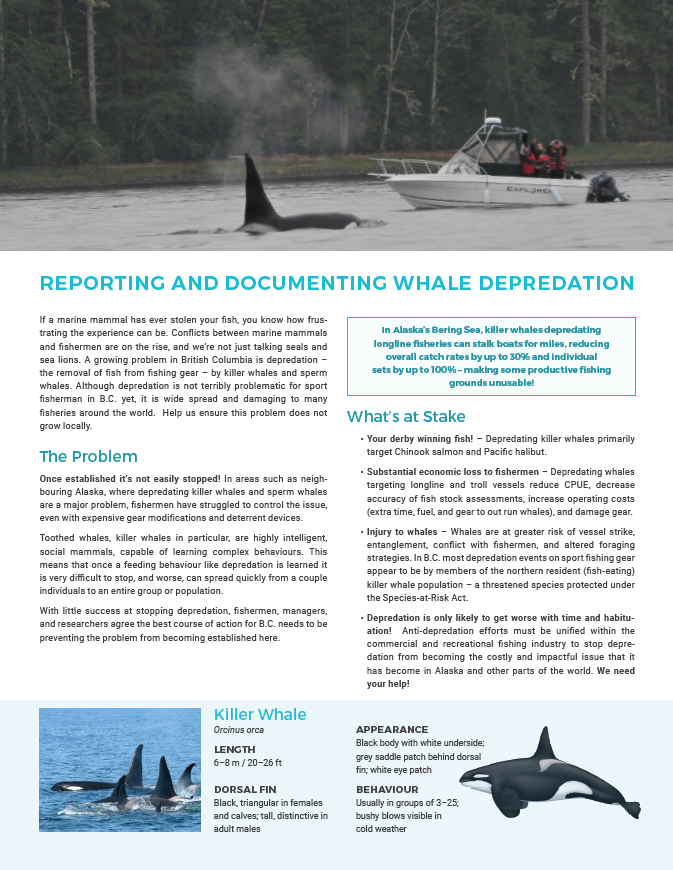 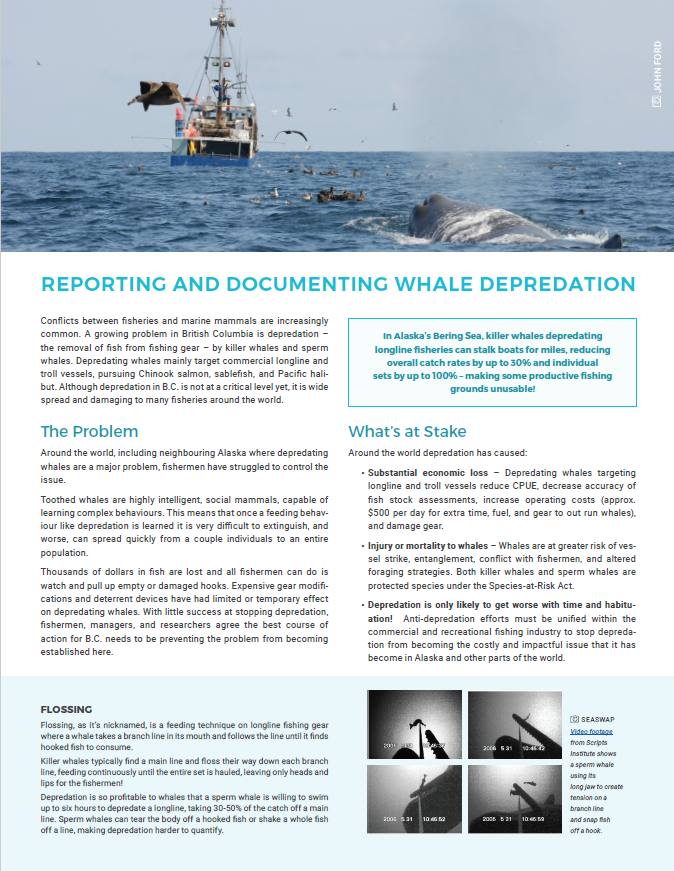