The diets of cetaceans in B.C. are widely varied and include many fish species targeted by human fisheries. The health of these fish populations is determined not only by the amount of harvesting, but also by ocean regime shifts, climate change, coastal development, pollution, and land management issues such as logging and agriculture.

Understanding the type and amount of prey each cetacean species requires is a complicated task.  Some species, like Pacific white-sided dolphins, may eat a variety of prey species, while others, like resident killer whales, appear to have a very restricted diet.  To find out what these animals are eating, scientists use a variety of techniques.  Leftover prey samples like scales and tissue fragments can be collected after feeding events, and when a dead/stranded animal is found, stomach contents are often examined to reveal its diet.  Researchers at the Center for Conservation Biology out of the University of Washington are even using canine assistance to find out what southern resident killer whales are eating.  When the wind direction is favorable, Tucker “the poop sniffing dog” is able to hone in on whale scat from the bow of a boat.  Once returned to the lab and analyzed, these fecal samples can reveal the whale’s diet,  identity, sex, and even measure toxins and hormones present in the animal’s system.

Prey sampling studies by Dr. John Ford and Graeme Ellis have determined that resident killer whale diets are made up of at least 96% salmonids (Ford and Ellis 2006).  Of that, 72% was Chinook salmon.   The whales’ preference for chinook salmon is likely due to this species’ relatively large size, high fat content, and unlike other types of salmon, they are present year-round in the whales’ range (Ford & Ellis 2006).  A further study in 2009 by Dr. John Ford and colleagues found evidence that resident killer whales not only prefer Chinook salmon, but  depend on them.  They showed that periods of killer whale population decline were primarily due to unusually high mortality rates in all ages of northern and southern resident killer whales.  This mortality across age classes was particularly evident in the mid-1990s, when Chinook abundance remained well below the average until 2002-2003.  During this time, the southern resident population dropped by 17% and the northern residents by 8%. 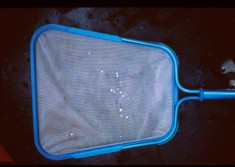 Scale samples collected after a feeding event. From theses scales, scientists can identify which species of fish was being preyed upon.

The link between resident killer whales and chinook salmon is strong, but took many years of research to understand.  In contrast, the importance of other prey species to the survival of other cetaceans is not well known.  Suboptimal prey availability may work in tandem with other issues.  For example, grey whale population in the eastern Pacific showed a marked decline in the early 2000s.  This may have resulted from the population reaching a carrying capacity combined with a decline in their prey in the Bering Sea feeding grounds.

Prey reduction for at-risk cetaceans either through competition with fisheries, climate change or other factors is a serious concern.  While many animals may not die specifically from ‘starvation’, low prey availability may result in ‘nutritional stress’ –  and this can make them prone to illness, infection, and the affects of contaminants. 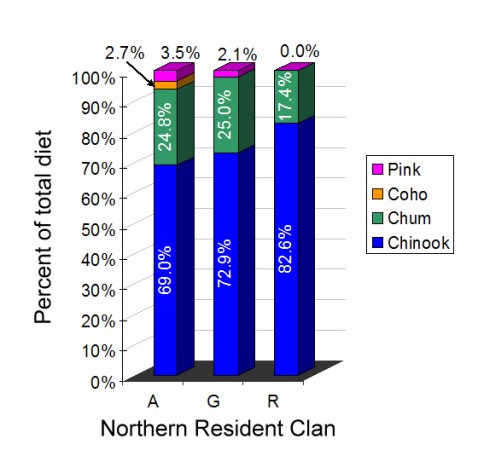 The diet of northern resident killer whales. Chinook salmon is consistenly preferred by all three clans.

WHAT YOU CAN DO

– To help protect healthy fish populations, ensure your seafood is sustainably caught.  Sustainable seafood can be defined as species that are caught or farmed in a way that ensures the long-term health and stability of that species, as well as the greater marine ecosystem. Use the Oceanwise program and the Sea Choice guide to make the best choices.

– help protect wild salmon and enhance their habitats by becoming a member of a local Streamkeepers organization.