In the North Pacific Ocean, underwater noise has doubled in intensity every decade for the past 60 years1.
Noise from shipping, seismic exploration, and military sonar contribute to underwater noise and may impact the ability of cetaceans (whales, dolphins, and porpoises) to conduct critical life processes such as communicating, foraging, finding mates, and navigating through their underwater environment. Read more below to learn how underwater noise impacts cetacean species found in British Columbia.

Killer whales depend on echolocation and acoustic communication to forage, socialize, and find mates.

The sophisticated echolocation system of killer whales is likely their primary sensory mode, and allows them to navigate and find prey in turbid, dark waters2.  Communication is also key to foraging success for resident killer whales.  Southern and northern resident killer whales are highly social animals that live out their entire lives in family groups.  Resident (fish-eating) killer whales travel together in matrilines, maintaining contact through a series of distinct underwater dialects that are unique to the group3.  While foraging, members of a group can spread out over several kilometres, maintaining contact and coordinating movements through the frequent exchange of loud vocalizations2.  When an individual captures a prey item, it is often shared among members of its matriline4.  Bigg’s (transient) killer whales, in contrast, often forage in silence2.  They depend on passive listening to hunt other marine mammal prey, since vocalizing could increase the chance of their prey detecting them.

In areas of high vessel traffic, killer whale echolocation and communication can be almost completely masked by boat noise5, and can interrupt important behaviours such as foraging, group cohesion, resting, and mating6.  Studies have shown that southern resident killer whales increase the duration of their calls when boats are present, likely as an adaptation to the masking effects caused by increased noise levels5.  Vessel noise can also increase a whale’s stress level and cause them to avoid certain areas5,6.  Avoidance of key foraging areas due to acoustic disturbance places additional stress on the endangered southern resident killer whale population, whose survival is already threatened by a reduction in prey availability and environmental contamination6.

In order to determine how vessel noise impacts killer whale foraging behaviour, the Port of Vancouver’s ECHO (Enhancing Cetacean Habitat and Observation) Program conducted a research trial to slow down vessels through Haro Strait. Haro Strait is known to be a key foraging area for southern resident killer whales during the summer months7.  It is also geographically constrained area with a busy shipping lane, which creates the potential for loss of foraging as a result of vessel noise. The trial requested piloted commercial vessels to voluntarily slow down to 11 knots while transiting Haro Strait from August 7th to October 16th, 2017.  Previous studies have indicated that slower ships are quieter; a one knot reduction in vessel speed may result in one decibel reduction in vessel noise8.  The trial aims to better understand the relationship between vessel speed and sound, the effects of reduced speed on the total underwater ambient noise in critical killer whale habitat, and the potential benefit that reduced speed might have on killer whale foraging behaviour.

To analyze the potential noise benefits achieved by slower speeds for different vessel classes, two hydrophones were deployed in the shipping lanes in Haro Strait to directly measure the acoustic signature of passing vessels and compare noise levels before, during and after the trial. Monitoring of total ambient underwater noise was conducted at the Lime Kiln hydrophone off San Juan Island, which served as an indicator of potential received noise levels by killer whales in this important foraging area. Comparison between trial and non-trial months will identify important factors affecting ambient noise levels. Visual observations and acoustic detection will be used in conjunction with a computer model, developed by JASCO Applied Sciences, in order to analyze the relative change in southern resident killer whale behavioural response.

Preliminary results of the trial suggest that speed reduction is an effective method for reducing vessel noise. Approximately 60% of piloted vessels participated in the slow down trial.  On average, vessels reduced their mean speed by 2.2 to 5.8 knots, resulting in a 4.9dB to 9.3dB reduction in vessel noise.  Slowing speed by 40% reduced noise emissions by approximately 10dB.  During the trial, there was a 44% reduction in ambient noise levels when a vessel was within acoustic detection range (6km) of the Lime Kiln hydrophone. These initial findings support speed reduction as a promising mitigation measure to help reduce underwater noise in the Salish Sea. The next steps will include a fine scale analysis of changes in ambient noise levels and behavioural modelling of killer whale response. Read more about the Port of Vancouver’s ECHO program here!

The BC Cetacean Sightings Network has launched the WhaleReport Alert System, an alert system that will broadcast pertinent details of whale presence to large commercial vessels.  Information on whale presence is obtained from real-time observations reported to the B.C. Cetacean Sightings Network via the WhaleReport app.  These alerts will inform shipmasters and pilots of cetacean occurrence in their vicinity.  This awareness will better enable vessels to undertake adaptive mitigation measures, such as slowing down or altering course in the presence of cetaceans, to reduce the risk of collision and disturbance.

Hearing is as important to cetaceans as vision is to humans. In response to the limited visibility of most ocean environments, cetaceans have adapted to take advantage of the physics of sound underwater. Sound travels approximately 4.5 times faster and 100 times further in salt water than in air2.  Low frequency sound experiences little attenuation, making it particularly effective for underwater communication over great distances1;   Baleen whales rely on these low frequency calls primarily for social communication, and their vocalizations can be heard by other individuals for hundreds of kilometres9.  Increasing levels of low frequency ambient noise from shipping, seismic exploration, and military sonar have been identified as a major threat to the recovery of blue, fin, and humpback whales in B.C. waters, as it may mask their vocalizations and displace them from their critical habitat9,10.

In October 2018, the B.C. Cetacean Sightings Network launched the WhaleReport Alert System, an alert system that broadcasts pertinent details of whale presence to large commercial vessels.  Information on whale presence is obtained from real-time observations reported to the B.C. Cetacean Sightings Network via the WhaleReport app.  These alerts will inform shipmasters and pilots of cetacean occurrence in their vicinity.  This awareness will better enable vessels to undertake adaptive mitigation measures, such as slowing down or altering course in the presence of cetaceans, to reduce the risk of collision and disturbance.

Harbour porpoise occupy coastal habitats and appear to be susceptible to vessel disturbance.

Harbour porpoise distribution is often restricted to shallow, coastal ranges that overlap with human activity11.  As a result, harbour porpoises appear to be particularly sensitive to environmental disturbance11.  Little is known about the abundance of harbour porpoises in B.C., but there are reports that populations in southern B.C. and Washington are declining.  Further reduction or displacement could occur as development and the use of coastal waters increases in these areas.  Acoustic disturbance has been identified as a significant threat to harbour porpoise and may interfere with foraging, navigation, and communication11.  Harbour porpoises demonstrate strong behavioural reactions to acute noise disturbance, and may become displaced from key habitats2,11. Researchers at Ocean Wise’s North Coast Cetacean Research Initiative are currently studying the effects of vessel traffic on the behaviour of harbour porpoises that occupy the area around Prince Rupert harbour, using a combination of visual and acoustic surveys.

Less common offshore species, such as beaked whales, are likely impacted by noise. 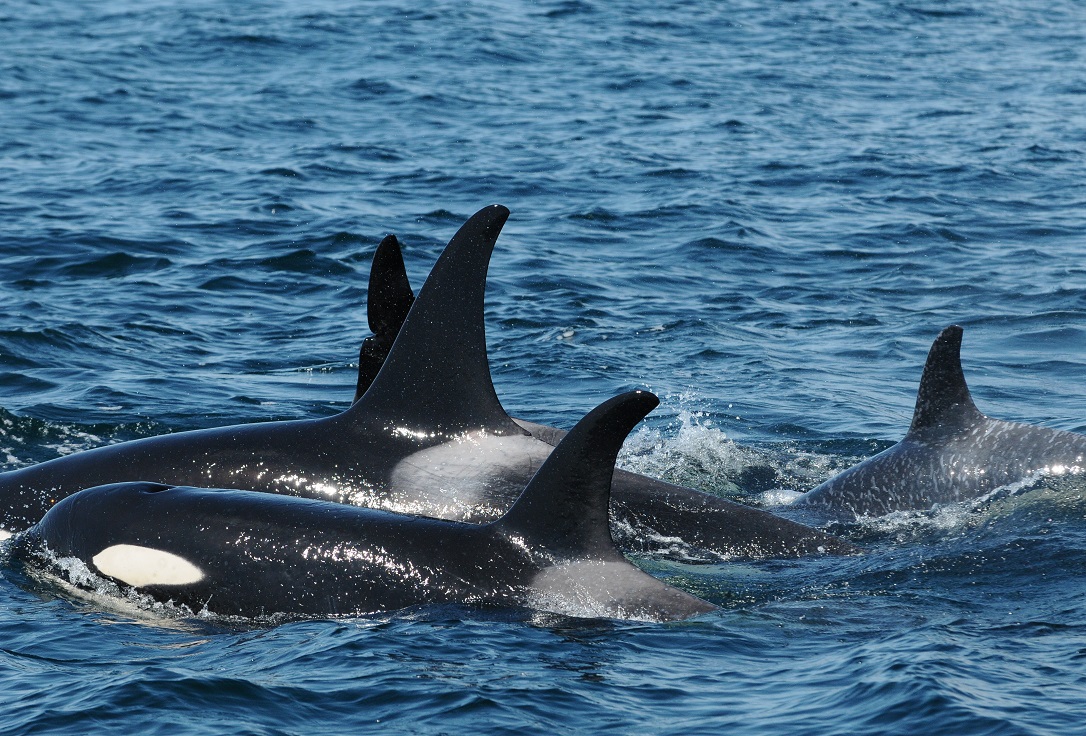 Killer whales are highly social animals that depend on echolocation and acoustic communication to drilling, socialize, and find mates. Noise pollution can disrupt these critical life processes for killer whales. 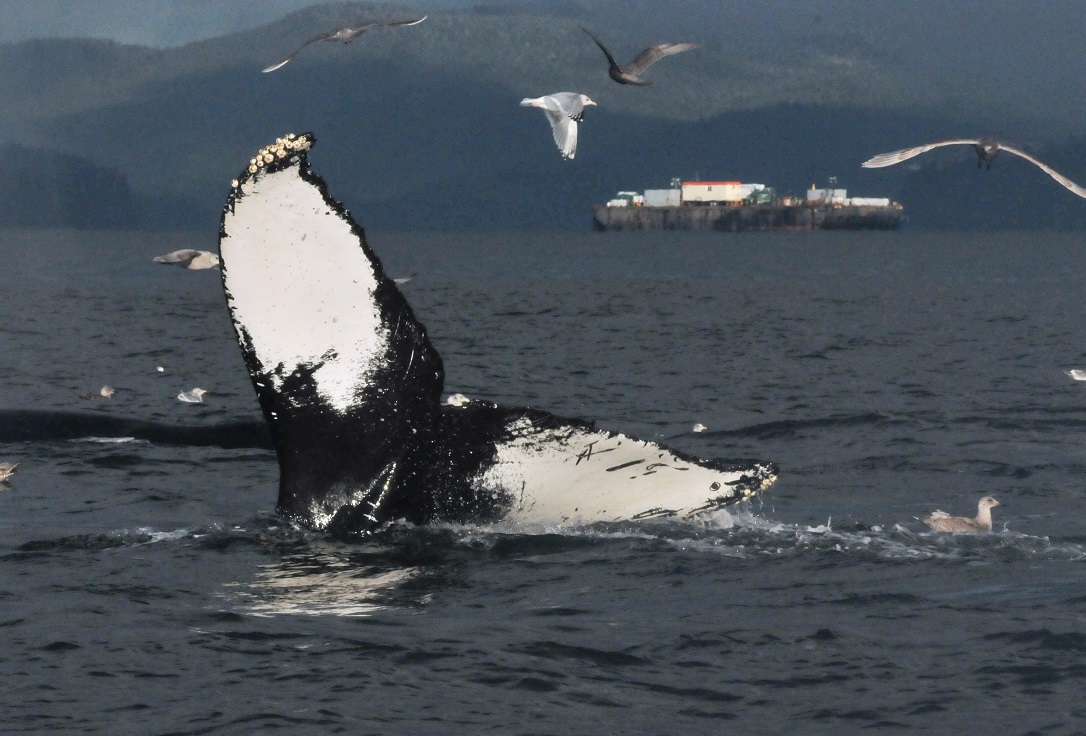 Increasing levels of ambient noise from shipping, seismic exploration, and military sonar may mask the low frequency vocalizations of baleen whales and displace them from their critical habitat. 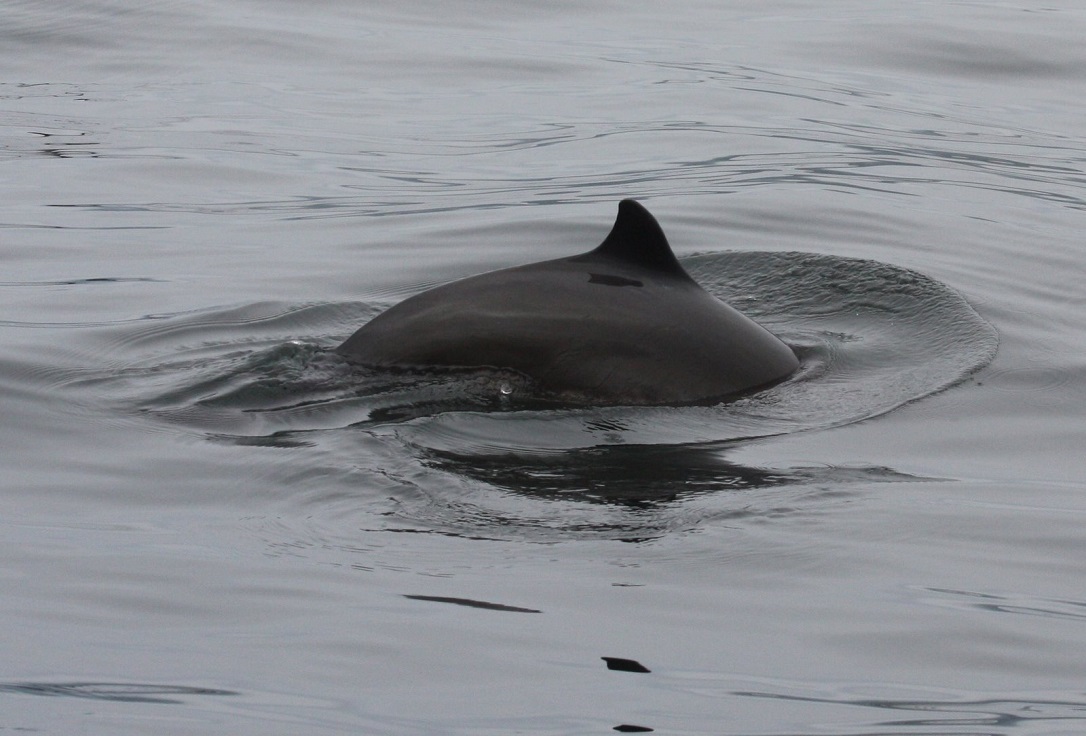 Noise pollution is a serious threat faced by beluga populations across much of their pan-Arctic range.

Belugas are highly gregarious animals that migrate from overwintering areas of broken pack ice to calving and feeding areas in shallow estuaries during the spring and summer13. They are often called “sea canaries” due to their extensive vocal repertoires.  Since they use sound to communicate, maintain group cohesion, navigate, and find food, noise pollution is one of the most pervasive threats belugas face in much of their range.  Exposure to noise pollution could potentially lead to significant disruptions of their behaviour and impair their ability to communicate efficiently.  Dr. Valeria Vergara, a beluga researcher at Ocean Wise’s Marine Mammal Research program, identified a specific type of call used to maintain contact between group members.  These calls, known as contact calls, are crucial for recognition and communication between mothers and their dependent calves14. Her research showed that beluga newborn calves initially make under-developed contact calls with lower peak frequencies than adult contact calls,15 making these crucial vocalizations more susceptible to masking by underwater noise.  Dr. Vergara’s studies in various areas (Cunningham Inlet, the Churchill River Estuary, and the St Lawrence Estuary) investigate how underwater noise disturbances compromises this system of contact calls.  This is a particularly important question in the St. Lawrence River Estuary given that high noise levels and anthropogenic disturbance have been identified  amongst the three main threats to the recovery of the population (in addition to a shortage of prey availability and high levels of contaminants)16, listed as endangered by the Species at Risk Act (SARA) in 2016. Learn more about Dr. Vergara’s research here. 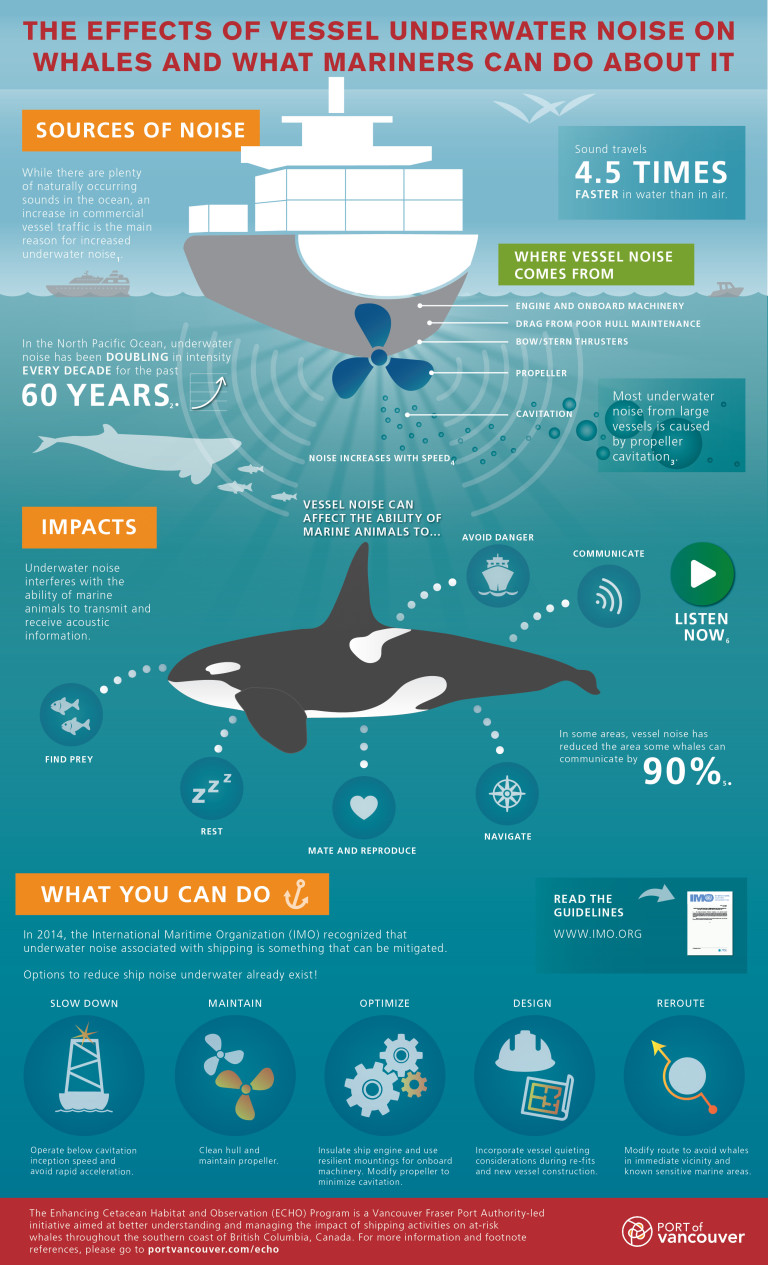 Infographic courtesy of the Vancouver Fraser Port Authority’s Enhancing Cetacean Habitat and Observation (ECHO) Program, aimed at better understanding and managing the impact of shipping activities on at-risk whales throughout the southern coast of BC.  Learn more here.