How do vessels disturb whales?

Disturbance by large and small vessels may disturb and alter activities that are crucial for survival such as foraging, feeding, socializing and breeding.

Motorized vessels contribute to underwater noise that can reduce the ability of whales to detect their prey, navigate, communicate, rest and avoid danger.

Whales are particularly vulnerable to emissions as, unlike terrestrial mammals, they do not have sinuses to filter air and they have no sense of smell to help them detect, and possibly avoid, engine exhaust.

Vessel disturbance is a cumulative issue. Although one boat may have a small effect, numerous boats and chronic exposure to vessels can lead to significant disturbance of cetaceans.

Cetaceans Live in a Noisy World

Vessel traffic, both commercial and recreational, has increased significantly along the British Columbia Coast. This rise in vessl traffic has caused an increase in physical and acoustic disturbance in cetacean habitat. Click the drop down menus below to find out more about how vessels impact cetacean species.

Disturbance by large and small vessels may disturb and alter activities that are crucial for survival such as foraging, feeding, socializing and breeding. For example, when vessels are nearby, both northern and southern killer whales reduce the time spent foraging in favour of traveling5,11. The interruption of feeding may impact the energy intake of these animals, which if persistent over time, may have individual and population-level impacts.  Southern resident killer whales also exhibit more energy-intensive surface active behaviours (spy hops, breaches, tail slaps, pectoral fin slaps) when vessels are within 200m8. Large whales can also be disturbed.  In Glacier Bay Alaska, humpback whales displayed avoidance behaviours such as diving, swimming away, reducing surface time, and changing respiration rates in the presence of cruiseships7.

Motorized vessels contribute to underwater noise that can reduce the ability of whales to detect their prey, navigate, communicate, rest and avoid danger.  In high vessel traffic areas, whale communication and echolocation can be almost completely masked by noise1.   Vessel noise can also cause stress in cetaceans and may result in the avoidance of noisy areas3.  Learn more about the effect of noise on cetaceans here.

Like cars, vessels using gas or diesel create exhaust, which can be harmful when inhaled. In particular, marine engines burning diesel contribute significant amounts of sulphur dioxide (SO2), particular matter (PM2.5) and nitrogen oxides (NOx) in B.C.9 Whales are particularly vulnerable to emissions as, unlike terrestrial mammals, they do not have sinuses to filter air and they have no sense of smell to help them detect, and possibly avoid, engine exhaust. Whales also spend much of their time diving, which increases pressure in their lungs and causes air pollutants to enter their blood more rapidly than for non-diving animals.  While studies have shown that current whale- watching guidelines are usually effective in limiting pollutant exposure, during some summertime weather conditions, a build-up of air pollutants caused by the formation of a stable atmospheric inversion layer over the ocean traps air pollutants at the surface where the whales breathe4.

Vessel disturbance is a cumulative issue. Although one boat may have a small effect, numerous boats and chronic exposure to vessels can lead to significant disturbance of cetaceans. Increased marine traffic around whales has been particularly dramatic in the trans-boundary region of Haro Strait (near Victoria), where a plethora of recreational boaters, both Canadian and American whale-watching boats, and heavy shipping traffic all converge in critical habitat for endangered southern resident killer whales. Data collected by Straitwatch, an on-the-water monitoring group, indicate that southern resident killer whales experience approximately 100 incidents of non-compliance with the guidelines per day from May to September10.  While longer-term studies are required to understand the effect of vessel disturbance on cetaceans in B.C., in Shark Bay, Australia, short-term responses to disturbance has resulted in a decline in abundance of bottlenose dolphins6.  It is also important to note that kayak and other self-propelled vessels can also disturb animals, especially in heavily-used recreational areas12.
The impacts of vessel disturbance also compound other threats. Disturbance causes stress on the animals, exacerbating the impacts of high contaminant loads and decreased food supply.

Whale watchers not following the Be Whale Wise guidelines.

Kayakers must follow the Be Whale Guidelines too, and always stay on the offshore side of the whales when they are traveling close to shore – unlike this group.

Reducing the impact of vessels on whales 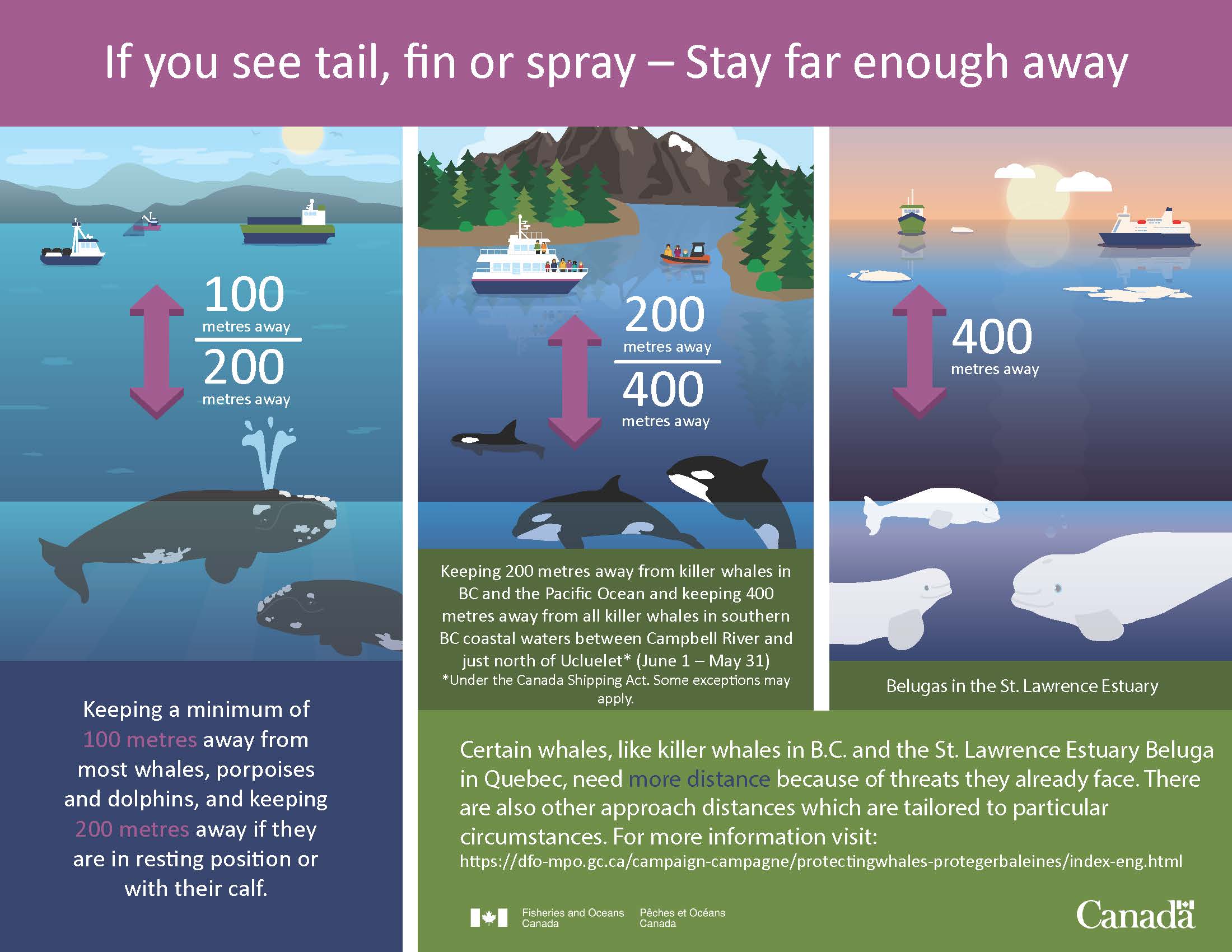 During the spring and summer, the BC Cetacean Sightings Network visits marinas and festivals throughout coastal BC to educate boaters about the Be Whale Wise Guidelines and the threats that cetaceans face.  Contact us at [email protected] if you would like us to visit your marina!

The Robson Bight (Michael Bigg) Ecological Reserve (RBMBER) was established by BC Parks in 1982 to provide an area free from boat traffic for killer whales that use the area to feed on abundant runs of salmon and rub on the smooth pebble beaches in the reserve (this behaviour is unique to northern resident killer whales). Since 1987, BC Parks has funded the Robson Bight Warden Program which informs boaters in the area of the ecological reserve and the Be Whale Wise Guidelines. Currently the Warden Program is run by Cetus Research & Conservation Society.

Follow the Be Whale Wise Guidelines when out on the water.  Slow down to less than 7 knots when within 400m of whales.  Do not approach any marine mammal within 100m (200m for killer whales).


If you belong to a professional marine organization and are a pilot or member of the bridge crew of a ship, use the WhaleReport Alert System to receive real-time alerts of whales in your vicinity.  Mariners can learn more about their impacts and mitigation measures to vessel disturbance in the Mariner’s Guide to Whales, Dolphins, and Porpoises of Western Canada.

The grey days of winter: Why the grey whale off the Victoria coast is unusual, and what you can do to help

By Dr. Chloe Robinson, SVICRI Research Manager Over the past two weeks, people of the Greater Victoria area have been treated to sightings of a somewhat unusual visitor for the time of year! Grey whales (Eschrichtius robustus) are more commonly found in the warm...
Read More

In early 2002, after the death of her mother, a young northern resident killer whale named Springer (A73) showed up alone and in poor health in Washington State's Puget Sound. An unprecedented rescue effort brought together scientists, government officials and...
Read More

If you’ve ever reported sightings to us before, you’ve likely come across our webform, hosted on our wildwhales.org website.  Although functional, the aging webform had one major drawback.  Unlike reports submitted via the WhaleReport mobile app, any reports submitted...
Read More

Your Sightings at Work! Reducing the risk of ship strike and disturbance with the click of a button.

Written by: Jessica Scott, WRAS Manager In British Columbia, we are lucky to share our waters with over 26 species of whales, dolphins, and porpoises (cetaceans), from the diminutive harbour porpoise to the mighty blue whale.  Unfortunately, the increasing marine...
Read More

Keep your distance, even after COVID: New study identifies how well boaters in the Salish Sea follow regulations around whales

Written by: Molly Fraser, University of Victoria MSc Student There’s nothing quite like seeing whales unexpectedly when you are out on the water, whether you are on your own boat, a friend’s or family member’s, or have chartered a fishing, sailing, or commercial whale...
Read More

Life isn’t smooth sailing for a whale – it’s our job to make it a little easier: A look back on our efforts from 2019

It’s tough being a whale these days. Your average killer whale might not have to worry about increasing fuel prices, nor does a humpback whale stress about getting a work assignment done on time. But, imagine inadvertently ending up in a shipping lane – essentially a...
Read More