History of Whaling in British Columbia

While not a current threat in Canadian waters, the repercussions of historical whaling are still seen in many threatened cetacean populations to this day.

Although the sustainable hunting of whales occurred in indigenous communities for thousands of years, the commercialization of whaling by Europeans in the 1800’s started the precipitous decline of many whale populations1. Driven by the demand for oil that could be rendered from the whale carcasses into soap and lard, pre-industrial whaling occurred in the Strait of Georgia and Queen Charlotte Strait between 1866 and 1875, using sailing ships and hand-thrown harpoons1. Grey whales and North Pacific right whales were the primary targets of these European whaling ships, and by the end of the 19th century these two species had already been depleted to the point where they were no longer commercially viable1. Several small fisheries for humpback whales also developed in the Strait of Georgia in the 1860s, but these efforts ended in 1870 with fewer than 100 humpbacks being harvested2.

At the turn of the century, the innovations of steam-powered ships, the development of explosive harpoons, and the invention of new rendering techniques revolutionized the industry and led to the first and second modern era of whaling3. By 1967, when a world-wide moratorium on whaling was finally instituted by the International Whaling Commission, at least 24,862 whales were removed from B.C. waters4. 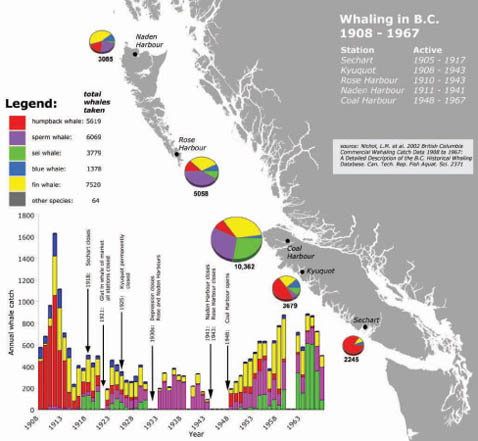 The Lasting Effects of Whaling in B.C.

Commercial whaling depleted most cetacean populations, and only a few of these populations have been able to make a substantial recovery.

Fin whales were also heavily targeted during whaling operations due to their large size; it is estimated that over 4,000 fin whales were removed by whalers from B.C. waters alone6.  The pre-whaling population of fin whales in the North Pacific was estimated to be 42,000-45,000, and was reduced to approximately 8,000-16,000 individuals by 19751.  Presently, there are no reliable estimates of fin whales in the North Pacific due to patchy survey coverage5, but Fisheries and Oceans Canada has continued to catalogue fin whales during field surveys, and numbers appear to be increasing1.  Both blue and fin whales are listed as Endangered by COSEWIC in Canada5.

Sei whales were heavily targeted by commercial whaling late in the whaling era, when blue and fin whale populations had been depleted5.  Prior to whaling, there were an estimated 42,000 sei whales in the North Pacific.  By the time a moratorium on whaling was passed, only 9,000 individuals remained1.  Despite being one of the most common species encountered by whalers in B.C. waters, sei whales appear to be scarce in this region today; no whales were seen during scientific surveys from 2002 to 2008, only 4 individuals were seen offshore in 2012, and no sightings have been reported to the B.C. Cetacean Sightings Network6.  Presently, approximately 100 sei whales are taken annually in the North Pacific by Japan for “scientific” purposes1.  Sei whales are listed as endangered by COSEWIC in Canada6.

In contrast, some grey whale populations in the Eastern North Pacific have recovered well from whaling1.  Prior to the start of commercial whaling, there were estimated to be around 12,000-24,000 grey whales.  Commercial whaling reduced this number to only a few thousand individuals by 19001.  After grey whales were granted legal protection in 1937, the population began to slowly recover and is now estimated to be around 20,000 animals1.  The population that utilizes Alaskan waters in the summer months has recently been assessed as Not At Risk by COSEWIC, but it was recommended that two other small populations-one that travels through B.C. waters to summer in Russia, and one that forages off the west coast of Vancouver Island-should be listed as Endangered7.  Grey whales are currently listed as Special Concern in Canada8.

Humpback whales have made a remarkable recovery from the devastating effects of whaling. Because of their coastal distribution and slow swimming speed, humpback whales were easy targets for commercial whalers1.  By the time the last humpback whaling station closed its doors in 1943, over 4,800 catches were recorded-more than any other species in British Columbia1.  Although the population was seriously depleted by the 1950’s, whalers continued to take humpbacks when they were encountered1. By the time whaling was finally banned in 1966, only 1,200-1,400 individuals remained in the North Pacific9.  An international study of humpback whales conducted from 2004-2006 called SPLASH, estimated that this population has rebounded to at least 18,302 whales10.  Due to the recent abundance estimates and increasing trend, humpback whales were down-listed from Threatened to Special concern by COSEWIC in 20119.

Sperm whales were hunted since the early 18th century in most of the world’s oceans due to the demand for whale oil derived from its spermaceti organ1.  By the time the International Whaling Commission issued a moratorium in 1988, more than 300,000 sperm whales were taken from the North Pacific4.  Currently, there are approximately 80,000 sperm whales in the North Pacific, and they are listed as Not at Risk in Canadian waters by COSEWIC1.  At present, approximately 10 sperm whales are taken annually by Japan’s scientific whaling program1.

Killer whales were not targeted by the commercial whaling industry in Canada, but a live-capture fishery, operating from 1962 to1973, removed 263 whales from the waters of British Columbia and Washington for display in aquaria11.  Most captured whales were southern residents, and this live-capture fishery further depleted this population, likely already reduced from years of intentional shootings1.  As people learned more about these animals, public opinion against live capture grew, and operations ceased in 19771. In BC, transient and offshore killer whales are listed as threatened, and northern and southern residents are listed as threatened and endangered, respectively12.  Killer whales are still hunted in small numbers in Japan, Greenland, Indonesia, and some Caribbean Islands1. 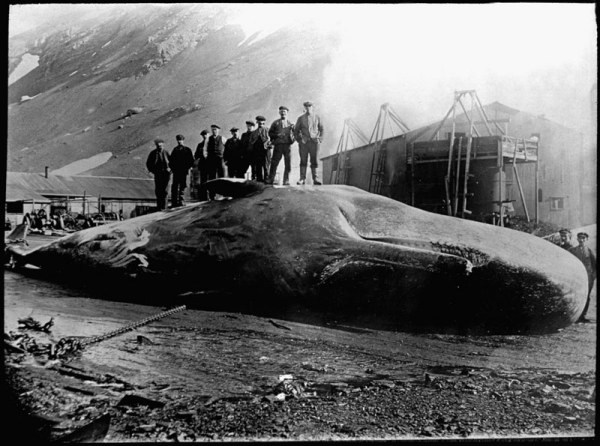 Aboriginal Subsistence Whaling and Special Permit Whaling still continues in other parts of the world.

In some parts of the world, whale products continue to play an integral role in the life of indigenous communities, and whales are still hunted to maintain native culture and provide an important source of nutrition. This whaling, called “aboriginal subsistence whaling”, is recognized by the International Whaling Commission as being different from commercial whaling in that it does not seek to maximize catches or profits13. Aboriginal subsistence whaling is not subject to the moratorium; instead, the national government must provide a Needs Statement which details the requirements of their indigenous people, and in turn the International Whaling Commission’s Scientific Community provides advice on the sustainability of proposed hunts and safe catch limits13. At present, Greenland, Chukotka, Alaska, and Bequia all participate in aboriginal subsistence whaling13.

Special Permit Whaling, also known as “scientific whaling”, still continues today, and is the subject of much contention. In The International Convention for the Regulation of Whaling, the legal agreement which establishes the International Whaling Commission, Article VIII states that countries are permitted to kill whales for scientific research purposes14.  It is the responsibility of the individual governments to issue permits and regulate these catches, but all permits must be reported to the IWC and research must be presented annually.  The government of Japan has undertaken Special Permit whaling since 1987 throughout the North Pacific and Antarctic, and has taken approximately 8,300 whales for scientific purposes15.  In November of 2016, Japan brought forth a proposal for a new special whaling program in the North Pacific, called NEWREP-NP.  Japan’s new proposal increases the allowable catch of sei whales and minke whales to 140 and 174, respectively14.  Despite the assessment by the IWC’s expert panel that Japan’s lethal sampling of whales is unjustified, Japan issued permits for the NEWREP-NP in June of 201714.  Japan’s take of sei whales is in direct contravention of the Convention on International Trade in Endangered Species of Wild Fauna and Flora (CITES), an international treaty which protects threatened wildlife from exploitation14.